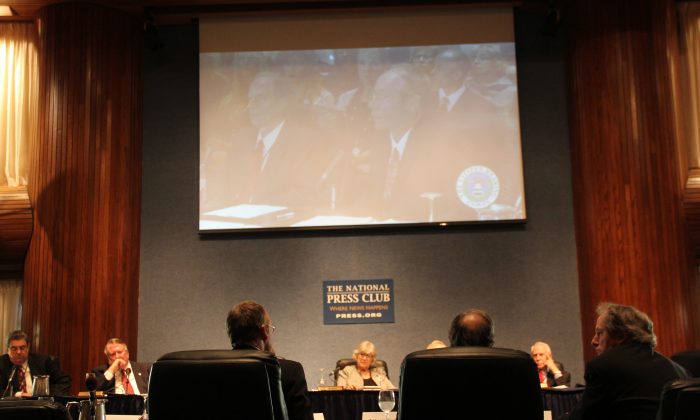 Witnesses report evidence of extraterrestrials at US bases
By Shar Adams

WASHINGTON—Researchers and specialists on extraterrestrial encounters and sightings joined former members of Congress Monday to begin a week of testimonials, with the aim to pressure the U.S. government to release classified information that it holds on extraterrestrials. Many of the participants especially want the government to declassify its information of alien encounters on U.S. military bases.

“It is very arrogant and presumptive to believe this is the only place where life exists in the universe,” said former Congressman Roscoe Bartlett.

Up to 40 international researchers and military or agency witnesses were expected to testify over five days at the Citizen Hearing On Disclosure, a mock congressional hearing on human encounters with extraterrestrials, held at the National Press Club, April 29 to May 3.

“We are going to ask the questions the public want to hear,” said former member of Congress Lynn Woolsey.

Former astronaut Navy Capt. Dr. Edgar Mitchell, the sixth man to walk on the moon, was unable to attend the Washington event and gave his testimony by video link.

“There are a number of us who have had these experiences,” he said. “We are not alone, we have been visited.”

Among the lineup of witnesses are military officers who have had direct experience with extraterrestrial beings.

Lt. Col. Richard French, in his nearly 30 years in the U.S. Air Force flew dangerous missions during the Korean War and worked for military intelligence. He described direct contact with extraterrestrial beings.

They looked just like the beings in the movie “Close Encounter of a Third Kind,” he told The Epoch Times, after his testimony. The skin was “slightly cool,” he said. They “did not talk” but seemed to communicate anyway. They were not hostile, he said.

Some of the witnesses were speaking publicly for the first time. Former U.S. Air Force Capt. David Schindele was a launch control officer for Intercontinental Ballistic Missile systems. He said he encountered an unidentified flying craft while working at the Minot Air Force Base, N.D., in 1966.

“I never spoke a word about this incident,” Schindele told the hearing Tuesday. “For almost 40 years my wife never knew.”

He described what he experienced in vivid detail, how the craft pulsated a soft light, how it hovered over the base without a sound, and how it paralyzed the electronic system, and vehicles, and radio communications. He also described how it took control of the missiles at the base and decommissioned them one by one, something he did not believe was possible before.

Those from the military who had given testimonials on the first day described not only their experiences with extraterrestrials, but also the difficulties they had experienced as a result of their encounters. Most of the sightings had instantly become classified, which meant no discussion of what they had seen with anyone was allowed. It also meant no debriefing, no support, no medical treatment on account of their experiences, and a virtual blackout of that particular time in history.

“We were military men, we followed the rules,” was the common refrain. It was only when they started to develop medical symptoms, or on the odd occasion, heard that certain material had been declassified, or much later, heard others speaking out, that they decided to break their silence.

“In addition, there is no credible information to suggest that any evidence is being hidden from the public’s eye,” Larson wrote.

While many documents and records of encounters remained hidden, he believes the Freedom of Information Act (FOIA) and some accidental releases have provided enough evidence to support the existence of extraterrestrial beings and their encounters with the U.S. military.

Dolan says the U.S government had mounted a “debunking campaign” to ridicule the idea of extraterrestrials and to hide the truth about extraterritorial encounters. When asked about the reasons why the government would do that, he suggested that it was complex and may include fear of panic among the populace, embarrassment at the inability to protect U.S. military bases, and the need to control extraterrestrial technology before others.

Hiding the truth, however, was not only holding science and progress back, he said, but it had also created a dangerous world of secrecy within government, which threatened civil liberty.

“Something important is happening behind the classified world,” he told the panel. He asked, “How long will the public and Congress continue accepting an embargo on the truth?”