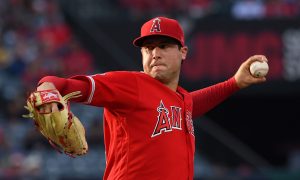 Cause of Death Revealed for Former MLB Pitcher Tyler Skaggs
0 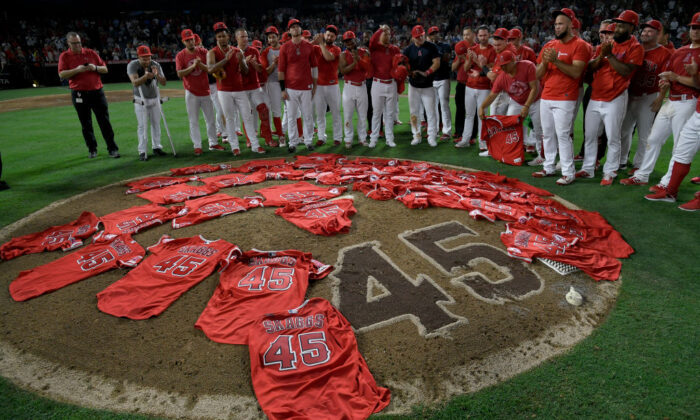 Los Angeles Angels public relations employee Eric Kay, left, joins the Angels players as they lay their jerseys on the pitcher's mound in honor of fallen teammate Tyler Skaggs after they won a combined no-hitter against the Seattle Mariners at Angel Stadium in Anaheim, Calif., on July 12, 2019. (John McCoy/Getty Images)
Southern California

Kay, 45, was charged with conspiracy to distribute a mixture containing detectable amounts of fentanyl, according to the U.S. Attorney’s Office in Dallas. Kay was taken into custody in Forth Worth, Texas, and made his initial appearance before a federal judge in the morning.

The complaint was filed July 30 and unsealed Aug. 7 upon Kay’s arrest.

Skaggs, 27, was found dead in his hotel room at the Southlake Town Square Hilton on July 1, 2019. The Orange County-based Angels were staying at the hotel while in town to play the Texas Rangers.

Southlake police received a 911 call on July 1, 2019, when Skaggs’ body was found in room 469 of the hotel, Lindenberg said. Skaggs died from a mix of “ethanol, fentanyl and oxycodone intoxication with terminal aspiration of gastric content,” according to Lindenberg.

“It was later determined that but for the fentanyl in (Skaggs’) system, (he) would not have died,” Lindenberg wrote.

Police recovered “several pills” appearing to be prescription drugs and a cell phone in the room. The pills were later determined to be fentanyl, the agent said. Blue pills found in the room were counterfeit, he added. Five pink pills found were legitimately manufactured, he said, and they did not contain fentanyl but were marked as oxycodone.

Kay was not the source of the pink pills, Lindenberg said.

Court documents detail a text-message exchange between Kay and Skaggs, indicating the transaction.

“During the course of the investigation, I learned that (Skaggs) and Kay had a history of narcotic transactions, including several exchanges wherein Kay acquired oxycodone pills for (Skaggs) and others from Kay’s source(s) in the days leading up to and surrounding (Skaggs’) overdose death,” Lindenberg wrote in the affidavit.

“During the course of this investigation, I learned that several individuals who were associated with Kay and (Skaggs) knew that Kay provided pills to (Skaggs),” Lindenberg wrote.

According to Lindenberg’s affidavit, Kay initially denied knowledge of Skaggs’ drug use, saying he was unsure if the pitcher used any narcotics except possibly marijuana.

Kay surrendered to authorities in Texas. His attorney, Michael Molfetta, issued a statement saying what happened to his client was a “tragedy.”

Molfetta said, “Now he will patiently wait for his opportunity to make his story known,” and that his client would “wait for the appropriate time to address the allegation.”

He decried “those who have elected to leak information and publicize documents,” and said that “it serves to undermine the basic tenet of our system of justice, the dispassionate ascertainment of the truth.”

“The courtroom is the best and only place to litigate this matter. Our defense team is working diligently to bring the truth to light, and we thank you for your anticipated patience going forward,” Molfetta said.

“The circumstances surrounding his death are a tragedy that has impacted countless individuals and families,” according to the team.

“The Angels organization has fully cooperated with law enforcement and Major League Baseball. Additionally, in order to comprehensively understand the circumstances that led to his death, we hired a former federal prosecutor to conduct an independent investigation.

“We learned that there was unacceptable behavior inconsistent with our code of conduct, and we took steps to address it. Our investigation also confirmed that no one in management was aware, or informed, of any employee providing opioids to any player, nor that Tyler was using opioids.

“As we try to heal from the loss of Tyler, we continue to work with authorities as they complete their investigation.”

Kay could face up to 20 years in prison if convicted.