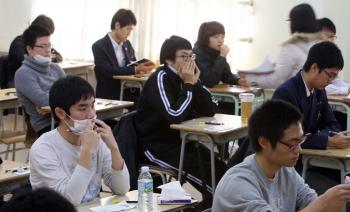 South Korean students prepare to take a standardised exam for college entrance at a high school in Seoul on Nov. 12, 2009. (CHUN YOUNG-HAN/AFP/Getty Images)
US

Joan Delaney
Senior Editor, Canadian Edition
Joan Delaney is Senior Editor of the Canadian edition of The Epoch Times based in Toronto. She has been with The Epoch Times in various roles since 2004.
View profile
Follow
biggersmaller
Print
A group is targeting Canadian and other foreign teachers of English in South Korea, alleging that they intentionally spread AIDS, molest children, rape Korean girls, abuse drugs, and are morally corrupt.

The Anti-English Spectrum Group has been vilifying foreign English teachers through its website, via the media, and by handing out flyers and pamphlets in the streets that contain defamatory information, says Dann Gaymer of the Association of Teachers of English in Korea (ATEK).

“Their claim is that they want to expel all illegal foreign teachers in Korea because they are causing untold damage to the infrastructure of Korea’s education system. But really their motivation comes down to very extreme nationalism and extreme xenophobia,” Gaymer says.

Some members of the 17,000-strong group also stalk foreign teachers, sometimes for months at a time, hoping to catch them in the act of doing something illegal and have them kicked out of the country.

The group, which has had several negative articles about foreign teachers published in the mainstream media, is also suspected of being the source of a recent anonymous death threat to teachers, says Gaymer.

“A threat was sent in an email that a group called Kill Whites in Korea is going to be formed and then they're going to start killing English teachers for Christmas.”

Gaymer adds that the group is also circulating a “doctored image” of ATEK president Greg Dolezal, claiming he has AIDS and that he has had inappropriate relationships with students.

“They're trying to make it look like Greg has committed some sex crimes which for a foreign English teacher in Korea is absolutely damning.”

Gaymer however notes that the group’s views are not indicative of those of the Korean people—a point also stressed byYounggoog Park, Minister-Counsellor of Public Affairs at the Korea Embassy in Ottawa.