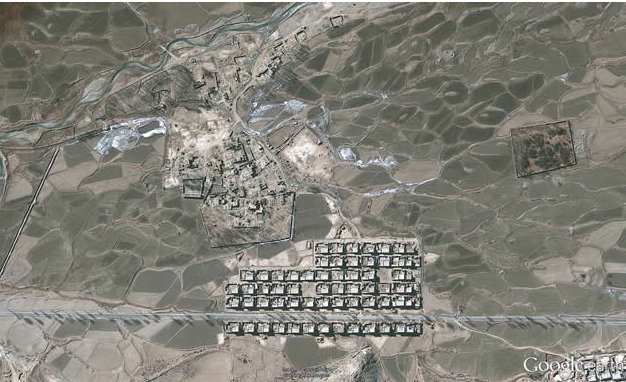 A screengrab of a Google Earth aerial view of Tibet in 2012. Most houses were demolished and rebuilt into a neat grid. (Google Earth via Human Rights Watch)
China

A rights group on June 27 released a report condemning an official Chinese program of forced evictions and resettlement of millions of Tibetans, saying it disrupts Tibetan culture and threatens their livelihoods.

The Communist Party (CCP) has been renovating houses and constructing new ones on a grand-scale since 2006, calling the policy “Comfortable Housing.” By 2012, two million people, which is more than 60 percent of Tibet’s population, have been forced into these homes, according to official records cited by Human Rights Watch (HRW) in a new report. The Party has similarly forced Tibetan herders in Qinghai Province to relocate and quit their nomadic ways.

Party statements say that all rehousing efforts were voluntary and respectful of “the will of the Tibetan farmers and herders.” It said that houses were designed with “ethnic characteristics,” a touch that is meant to represent the cultural sensitivity of the regime.

HRW says that although they do not have evidence that Chinese authorities have physically, forcibly moved Tibetans from their homes, the definition of “forced evictions” under international law can simply mean that the regime didn’t offer Tibetans any other choice.

Inhabitants of houses marked for reconstruction and herders to be resettled are bribed into leaving by what later turn out to be false promises of compensation. They also feel pressured not to oppose what the regime has portrayed as a major political decision, says HRW. “Without an independent judiciary, in practice the law is little other than what officials say it is,” HRW cited the Tibetans as saying; those evicted thus are left with little defense.

The regime claims the housing reform will improve Tibetans’ standard of living and increase economic activity by preventing overgrazing and modernizing the Western provinces, which are poorer than the rest of China.

However, Tibetans told HRW in interviews that the houses they were relocated to were often of poorer quality or increased their living costs, and that moving had created financial hardships for them, given that it often came with the loss of significant herds and land.

Some of the problems “raised concerns about the sustainability of China’s mass relocation and re-housing policies,” HRW wrote in the report, “especially once the tide of initial subsidies and investments” from the regime diminish. Most of all, Tibetans fear that the housing upheaval will “erase their distinct culture and way of life.”

HRW’s research was corroborated by some of the regime’s own audits. An inspection team with a commission under the State Council, for example, said that some new settlements had been built on potentially hazardous areas, some Tibetans had been separated from their herds, and many houses were designed with a “lack of rational design” and without considering the herders’ needs. Also, many Tibetan households had to pay off up to 75 percent the cost of the renovation or reconstruction of their homes, according to official work papers cited by HRW, a fact that was little reported in Chinese state-run media.

Interviewees characterized the housing policies as an attempt by the Communist Party to increase its control over Tibetans, forcing them to trade “poor but stable livelihood patterns for the uncertainties of a cash economy in which they are often the weakest actors.”

Some of the regime’s longstanding Tibetan policies have changed somewhat under Xi Jinping’s leadership: Tibetans in Qinghai and Sichuan Provinces, for example, are now reportedly allowed to openly worship the Dalai Lama, the Tibetan spiritual leader who was traditionally the target of much denunciation and political calumny by the Communist Party. While Tibetans are allowed to worship him in a religious sense, he may absolutely not, however, be taken as a political leader.