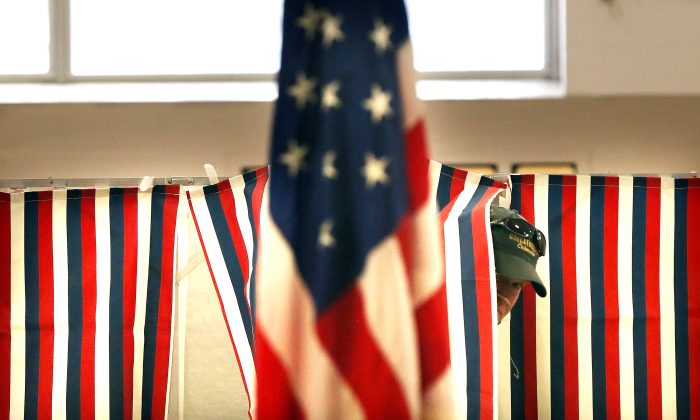 A man exits a voting booth inside a middle school serving as a voting station on the day of the New Hampshire Primary in Bow, N.H., on Feb. 9, 2016. (Spencer Platt/Getty Images)
Opinion

For Those Eligible, Voting Should Be Easy

The elections process is not usually grist for inflammatory rhetoric. But this year has been different. Republican Donald Trump labeled the GOP primary process “crooked.” Democrat Bernie Sanders suggested his party’s use of super-delegates made its nominating process a “rigged system.” For many voters, the intricacies of voting rules quickly became a topic of overriding interest.

Now that the primaries are over, I hope Americans remain just as intrigued by the laws governing general-election voting in their states. Because at the moment, this country is engaged in an experiment with the democratic process that should rivet everyone who cares about representative government.

Casting your ballot is a fundamental constitutional right, and ensuring that every eligible voter can do so is basic to our system. It should be easy to vote and hard to cheat.

We’ve seen two diverging trends in the states in recent years. One approach has sought to make voting more difficult. Since the 2010 elections, 22 states have put laws in place narrowing voters’s ability to go to the polls. They have decreased the time allotted for voting, added tough ID requirements, reduced options for voting prior to Election Day, added proof-of-citizenship requirements, and made it necessary for voters to register well before election day. These steps, their backers contend, are necessary to guard against voter fraud and assure the integrity of the ballot.

What It Takes to Be an Effective Citizen
Before You Reject the System, Understand It

Other states have moved in the opposite direction. They’ve made it easier to register to vote, have added longer hours for voting on election day, have moved to mail-in ballots, and encourage early voting. They’ve done all they can to make the process of voting simple and convenient.

On the whole, Republicans at the state level have favored greater restrictiveness and Democrats greater ease, but you don’t have to be a partisan of one side or the other to recognize that politicians believe a great deal is at stake. Whatever they give as their reasons for pushing a particular approach, you can be sure they are also calculating the effect of rules changes on the outcome of elections, and they’ll do all they can to tilt the rules in their favor.

Which is why the question of how to approach the right to vote isn’t going to be settled any time soon. There are a lot of court cases pending in the various states, and it’s likely there will be conflicting judicial opinions.

If we’re going to debate the electoral process as a nation, let’s keep in mind the core issue: It should be easy to vote—and hard to cheat. Casting your ballot is a fundamental constitutional right and ensuring that every eligible voter can do so is basic to our system. Every American should be able to exercise his or her right to vote without feeling cowed—which is why I worry that efforts to limit voting will have a pernicious effect on our system of representative government.

The evidence on this is mixed. A recent paper by political scientists at UC San Diego analyzing turnout between 2008 and 2012 in states with strict voter ID laws found that they depressed voting overall—more among Democratic constituencies, but among Republicans, too. Yet recent research also suggests that the opposite is not true: Easing voting rules in states that never tightened them does not necessarily boost turnout.

One certainty in all this is that a lot of people who are eligible to vote for various reasons do not choose to do so. Of the 219 million Americans eligible to vote in 2014, the Census Bureau reported last year, roughly 41 million were not registered; and turnout in actual elections is even lower. Voting behavior may be more related to motivation than it is to statutory activity.

A more pressing certainty is that our entire voting system needs attention. All too many jurisdictions try to run elections on the cheap, with machinery and processes that are inadequate to the task. Even now, 16 years after the 2000 presidential election revealed deep flaws in the patchwork of ways we record and tally votes, the system remains rickety.

“The vigor of American democracy rests on the vote of each citizen,” a national commission on voting once wrote. Keep that in mind this election year—and pay attention to how your state approaches its obligation to safeguard that vigor.