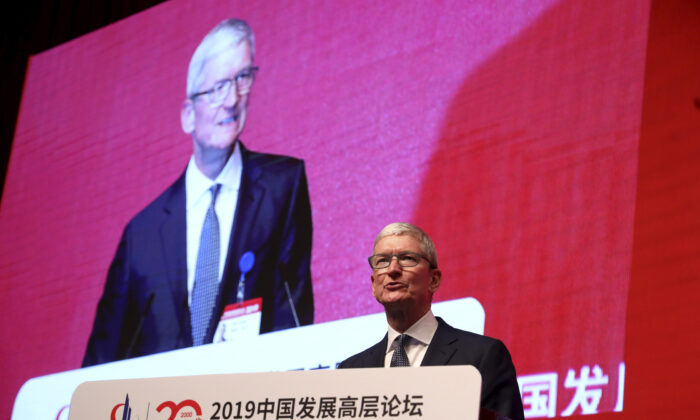 For Many of America’s Elites, China and Communism Have Already Won

Those who thought America was turning communist I would privately think of as paranoids.

This change evolved from my observation of how communism is actually practiced in the People’s Republic of China, Cuba, and the former Soviet Union—all of which I visited.

It was readily apparent that little in these countries favored “the people,” as advertised. The populace seemed less equal than any places I had ever been, even to the obviously differing cut of cloth used on the supposedly egalitarian blue Mao suits worn by all in 1979 China.

It was no accident Castro died a billionaire and Xi Jinping sleeps in Zhongnanhai, The Forbidden City, where the emperors lived. Today, Beijing has more billionaires in number than New York.

Marx’s “dictatorship of the proletariat” was theoretical hooey thought up by a narcissist in a museum library with little reference to what was going on, or ever would be, on the streets outside.

In the real world his ideas indeed engendered a dictatorship, but a dictatorship of party elites, the proles be damned (or have their “social credit” scores docked, if they even got that far).

Forget Marx’s vaunted “withering away of the state” or anything similar. Karl’s theories instead provided rhetorical cover for what became by far the most rigid, murderous large scale totalitarian systems in history (China and Russia).

Today, his rhetoric has been updated with politically correct nostrums like “equity” and “privilege,” neologisms devised to inculcate this same tyranny into a new generation via social media and academic hypnosis.

Meanwhile, capitalism is fine, in fact necessary, as long as it’s their capitalism with businesses properly aligned to the Party, preferably, these days, through birth.

Indeed, it was always fine. Lenin instituted the NEP—New Economic Policy—managed capitalism, back in the early 1920s because he knew socialism was an economic failure and would never work.

So how is this taking over America?

Trevor Loudon has done an estimable job of showing how successful the covert infiltration of communism into our political parties, academies, churches, and other institutions has been.

But nowadays this is almost no longer necessary. The work is over. In a sense Capitalism is the New Communism.

Allow me to explain.

Oliver Stone famously told us in his film “Wall Street” that “Greed is good.” What Oliver didn’t realize at the time, or didn’t want to say, is that communism, specifically Chinese communism, aka Socialism with Chinese Characteristics, is even more greedy than Wall Street.

Wall Street knows this—they’re not fools—as do a whole host of our political, corporate, and media leaders.

Many of them—almost all of them to the left of center, at least publicly—have quietly decided, whether they admit it to themselves consciously or not, that China will be the winner in its struggle with the United States and the West. Some of them even want it that way for their own advantage.

Again, for the most part unspoken, they see the CCP as monolithic and better organized—not having to deal with the untidiness of democracy—and clearly more ruthless (from Tiananmen to the Uyghur to the Falun Gong), and therefore inevitably victorious.

It’s an “if you can’t beat ’em, join ’em” situation, as pathetic as that sounds. And it’s all around us.

Making mega-bucks then off China trumps opposing their horrifying policies for a great percentage of our country, often especially to those who pretend otherwise.

So many parts of our society are guilty of this it’s almost impossible to enumerate.

But we could start with the corporate world that is turning toward “wokeness” in droves—not that their CEOs are giving up a penny of their $15m plus salaries or have stopped profiting as much as possible from the despotic CCP.

In reality, that hypocrisy is the point for these globalists.

Globalism, as I wrote in an earlier piece, is in reality China-ism. That’s how it works.

A perfect example is giant Apple whose most recent quarterly China revenue came in at a record-breaking $21 billion+. At the same time we got all sorts of “social justicey” talk from CEO Tim Cook.

What Cook is doing, cashing in big on one side while mouthing “liberal” pieties on the other, suits the Chinese communists perfectly well, essentially enabling them. Apple then becomes a linchpin of American communism much in the way Huawei is a linchpin of Chinese communism. (Not inconsequentially, Apple’s top five executives, including Cook, earned a total of almost exactly $120 million in 2020, up 13 percent during the pandemic.)

Almost our entire corporate world is trotting eagerly behind, the majority acting in the same manner. And now, scariest of all, the military has gone “woke.” Who benefits from that?

The Bill of Rights, “liberty and justice for all,” what we knew to be America or, for that matter, any truths “we h[e]ld to be self-evident” are being left in the dust in this alacrity to exploit the Chinese market.

At least when Nixon and Kissinger went to meet with Mao and Chou, they had excuses—that they could triangulate with the USSR and that, possibly, opening up Communist China might induce them to be like us. That was proven wrong, and then some, when China joined the World Trade Organization.

The left, particularly the Latin American left, frequently says “¡El pueblo unido, jamás será vencido!” The people united will never be defeated. Unfortunately, that’s not always true, since, in this case, we are the people.

Nevertheless, we can refuse to be American versions of Chinese communists, first by not buying their products, second by not patronizing companies that deal with them (very hard but doable—at least we can reduce), by publicly and loudly opposing them at every turn, exposing their mammoth hypocrisy, in the streets, if necessary, and finally by electing officials willing to do the same (at least we hope they are).