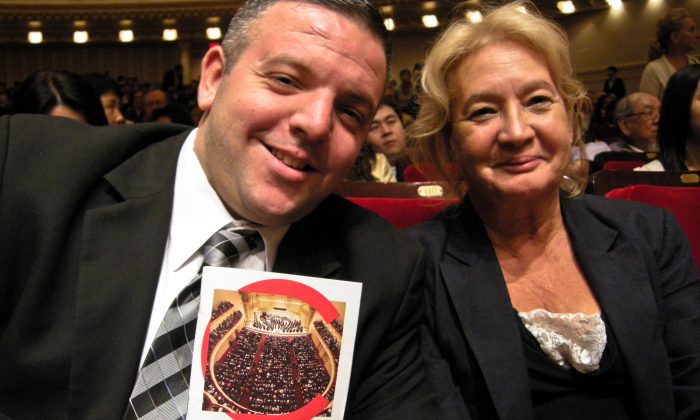 “What inspires me is that it is very spiritual, and it sends a very strong message of unity and justice and equality,” Ms. Flores-Vazquez said.

She said the fusion of Western classical and Chinese classical instruments was incredible. “It sends a message of diversity and unity, and it promotes a culture of the Asian community,” she said.

Mr. Rocco also enjoyed being immersed in the traditional music of China.

“They want to show the world Chinese culture, all the positives and the history that’s involved. There’s so much history in China that the rest of the world doesn’t know about generally,” he said.

“The orchestra melds the spirit, beauty, and distinctiveness of Chinese music with the precision, power, and grandeur of the Western symphony orchestra,” the website states.

“I think they are all excellent performers and that they all complement each other,” Ms. Flores-Vazquez said. “It sends out a message of unity and diversity within the Asian culture.”

She said the message for her, when she listens to the orchestra, is “good against bad, and that good will win at the end of the day.”

Mr. Rocco said: “The fact that they are world-renowned is excellent. It’s a good experience. Apparently they are very important, and very known throughout the world.”

Mr. Rocco lives in Flushing, where there is a large Chinese community. He said he hoped other parts of Chinese culture—other than just food—would become part of American culture.

With reporting by NTD Television, Alec Wang, and Sarah Matheson