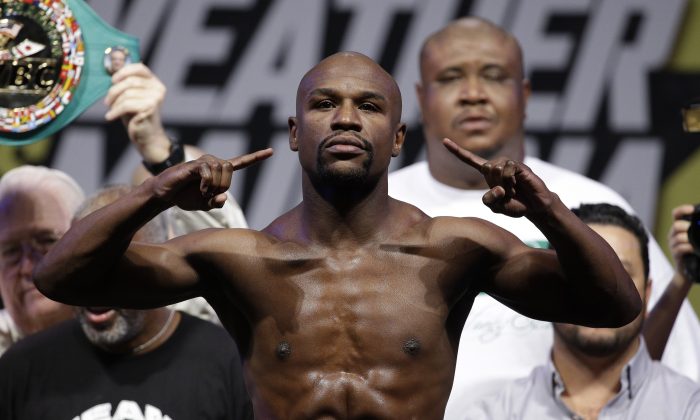 Floyd Mayweather Jr. is reportedly seeking two-thirds of the revenue in a potential fight with Manny Pacquiao.

Pacquiao and Mayweather have linked to a superfight for years, and with the two boxers getting up there in age, the time to make the bout happen is dwindling.

But according to a report in Sports Illustrated on Friday, money is the biggest problem.

“With the buzz for a potential super fight between Floyd Mayweather and Manny Pacquiao once again reaching a fever pitch, there continue to be indications that the finances of this anticipated showdown will be a significant obstacle. According to a source close to Mayweather, if a Pacquiao fight were to happen, Mayweather would need to receive close to two-thirds of the revenue,” writes Chris Mannix with SI.com.

However, Pacquiao promoter Bob Arum said the figure wasn’t accurate, adding that he has been speaking with CBS CEO Les Moonves. CBS is the parent company of Showtime, which has a deal with Mayweather for his fights.

Boxing promoter M. Akbar Muhammad, based in the United Arab Emirates, also offered $110 million to Mayweather and combined purses of $200 million to carrying to the Pacquiao-Mayweather fight in the country.

“If Mayweather signs on, if the deal with us is OK, we have no objection to fighting in Abu Dhabi,” Arum said of the potential deal. “Do I know whether it is real, if it’s real money, of course not. I’m not paying any attention to it. Until they get Mayweather, there is no reason to. There is an awful lot of oil money in the Middle East, and there are people who don’t care about making a profit, but do it for other reasons.”

Muhammad, who was a senior executive at Top Rank, also elaborated on the prospect of the fight.

“The location of the proposed Mayweather vs Pacquiao fight will be Abu Dhabi, the capital of the United Arab Emirates,” he said, according to FightSaga.com. “Some members of the media said the fight would be, for instance, in Dubai. That is 100 percent incorrect. Abu Dhabi is and always has been the one and only site for this event.”