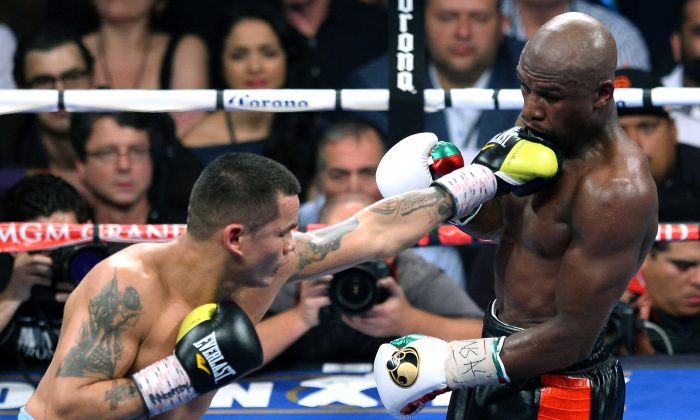 Marcos Maidana (L) throws a left at Floyd Mayweather Jr. in the eighth round of their WBC/WBA welterweight unification fight at the MGM Grand Garden Arena on May 3, 2014 in Las Vegas, Nevada. Mayweather took Maidana's title with a majority-decision victory. (Ethan Miller/Getty Images)
Sports

Floyd Mayweather Next Fight 2014: Rematch with Marcos Maidana; or Bout with Manny Pacquiao in September?

Following Floyd Mayweather Jr.’s win over Marcos Maidana people have been wondering who he’s going to fight next.

Some say that Mayweather should engage in a rematch against Maidana, as some believe that Maidana should have actually won the fight.

“I don’t duck or dodge anyone,” Mayweather said. “If Maidana feels he won, in September, he can get it again. Did Maidana win some rounds? Absolutely. I’m not going to cry and complain.”

Mayweather did add that he wants a different referee next time and said Maidana fought dirty.

Amir Khan is out of the picture because Mayweather, as he said, wants to fight his next fight in September. Khan says he wouldn’t have enough time to prepare after the end of Ramadan.

Danny Garcia is another possible opponent. He’s undefeated, going 28-0 with 16 knockouts. Mayweather may want Garcia for his size.

“At 140 pounds, Garcia is a far smaller opponent than Maidana,” reported Bleacher Report. “After Money was knocked around the ring for a good portion of Saturday’s fight, it’s conceivable he will want to fight a smaller opponent next.”

Garcia told ESPN last year that he was open to fighting Mayweather.

“You know, I really don’t know. At the end of the day, I’m just a fighter. I come to fight with heart and I give the fans what they want. If Golden Boy and [adviser] Al Haymon want it, I’ll do it. It is what it is.”

Another possibility is the highly anticipated and always rumored match between Manny Pacquiao and Mayweather–but there hasn’t been any concrete indications that this fight will happen.