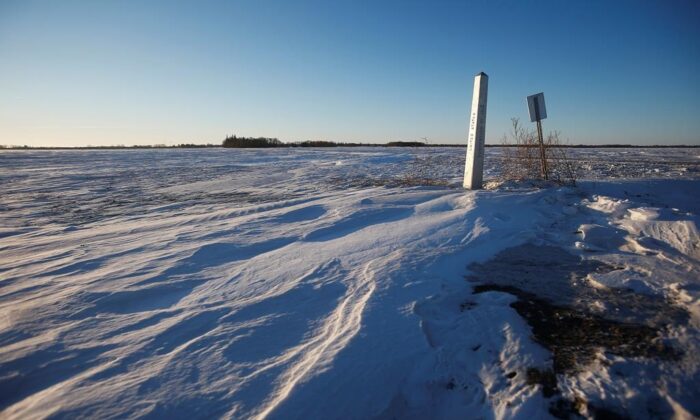 A border marker is shown just outside of Emerson, Man., on Jan. 20, 2022.(The Canadian Press/John Woods)
Canada

WASHINGTON—A Florida man is set to appear in U.S. court today, charged with sneaking migrants across the Canada−U.S. border in a perilous human−smuggling scheme that cost the lives of four people, including an infant.

Steve Shand, 47, will appear by video before a Minnesota judge for a detention and preliminary hearing.

Shand, of Deltona, Fla., is charged with transporting or attempting to transport illegal aliens.

The victims, believed to be a family from India who perished in the cold, were found just metres from the border on the Canadian side, near the Manitoba town of Emerson.

Investigators believe they were part of a larger group of Indian migrants who were trying to get into the U.S. by way of Canada.

Their bodies were found Wednesday, shortly after U.S. Border Patrol agents pulled over a passenger van on the American side and found two other undocumented Indian nationals inside.

At about the same time, agents encountered another group of five migrants, one of whom told the agents they had been walking through the snow and bitter cold for more than 11 hours.

Department of Justice officials say the deaths are likely linked to a larger human smuggling operation—a phenomenon that’s practically a fact of daily life in the southern U.S., but rarely seen up north.

Shand “was encountered driving in a rural area on a dirt road in an area far away from any services, homes or ports of entry into Canada,” court documents say.

Evidence detailed in the documents also suggest the group was not the first to recently make the perilous trek: twice in December and once in January, border patrol agents found boot prints in the snow prior to Shand’s arrest near where the van was pulled over.

On Jan. 12, agents found prints that “matched the brand of the types of boots worn by five of the seven foreign nationals arrested in the current smuggling event,” the documents say.

On or about Dec. 12 and Dec. 22, “two groups of four appeared to have walked across the border into the U.S. and were picked up by someone in a vehicle.”

In the first incident, RCMP officers found a backpack at a location in Manitoba “believed to be the drop−off point” that contained a price tag in Indian rupees.

A court file from Florida that dates back to 2018 shows that Shand, a naturalized citizen originally from Jamaica, filed for bankruptcy more than three years ago, reporting assets worth $193,343 and liabilities of nearly $160,000.

Describing himself as an Uber driver, Shand’s assets at the time included two vehicles — a 2016 Toyota SUV and a 2014 Honda Civic — and the $161,957 single−family home in the central Florida community where he lives.

Consular officials met over the weekend in Winnipeg to assist with the investigation and to help identify the migrants and track down family members. As of late Sunday, the victims had not been publicly identified.