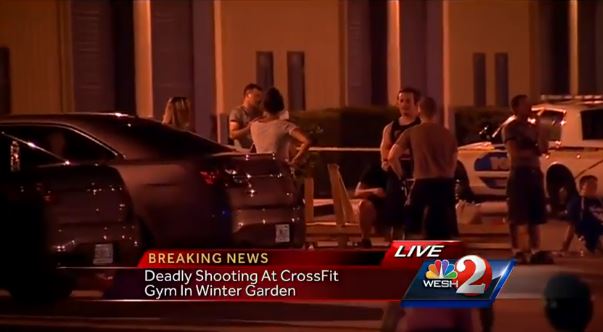 In this screenshot of video from WESH-TV, police officers question witnesses at the scene of a shooting at CrossFit Mosaic Gym in Winter Garden, Florida on August 12, 2013. The owner of the gym, Richard Millsap, was shot and killed. (Screenshot/WESH-TV)
US

The owner of CrossFit Mosaic in Winter Garden, Florida was shot and killed on August 12.

The man killed was Richard Millsap Jr., the owner of the gym. Friends and other witnesses confirmed it was Millsap before police officially did on Wednesday.

A gunman walked into a crossfit class at CrossFit Mosaic Gym around 6:45 p.m. on August 12 with his hands in his pocket, pulled out a gun, and shot Millsap.

Since only one person was shot and because the suspect walked past others and didn’t shoot anyone else, police think the victim was targeted.

“Whoever the killer was walked into the gym, said, ‘Nobody move,’ walked up to Richard and shot him dead,” Mosaic Community Church member Jerry Phillips told ClickOrlando. “Shot him twice and walked out and there was a getaway car, so it was an assassination.”

Friends of Millsap said that he remarried a few years ago and said that he recently turned around his life and started going to church. In 2007, Millsap was at the house of NBA player Deshawn Stevenson when someone opened fire and wounded a man there. Police officers said no one inside the house would cooperate and no arrests were made.

Millsap was also accused of witnessing Stevenson rape an underage girl in 2001 but no charges were filed against him.

“Unfortunately sometimes our past does come back for all of us to haunt us, even though he had turned the corner and his life was transformed,” Phillips said.

Millsap also narrowly escaped injury when multiple bullets struck his car in October of last year, according to law enforcement records obtained by the Orlando Sentinel.

When Millsap reported to police that several bullets struck his vehicle, he told them that he had no enemies and didn’t know who would want to shoot him.

Eight people were in the CrossFit class when the shooting happened on Monday.

One class participant tried to chase the gunman but the suspect, described as a black male wearing a hat and sunglasses, got away with the help of a getaway driver. Police are looking for both. See the fourth photo in the slideshow for a police drawing of the suspect.

“They’re all pretty upset,” Lt. Scott Allen told the Orlando Sentinel, referring to friends of the victim. “They all cared for this victim… and they’re having a difficult time dealing with it.”

There’s lots of witnesses to what happened, said Allen. Police are working on interviewing all of them and trying to figure out what exactly happened, as well as pursue the suspects in the case.

The gym is on Carter Road between West Colonial Drive and East Story Road.

Reaction to Millsap’s Death and Planned Benefit for Family

“It was devastating,” said Michael Pritzkau, of Winter Garden, who was not there when the shooting happened but joined others late Monday to mourn Millsap.

“Rich was a big inspiration. He got people going on the right path. A lot of people listened to him and looked up to him.”

Millsap’s wife Karen said in a Facebook post that she is overwhelmed by what happened but “it’s amazing to have such a community of support in crossfit.”

“Richard was the true embodiment of ‘sleep, eat, WOD[Workout of the Day],'” she said. “For him, crossfit meant ‘getting fit to carry the cross’…. And he was perfect when God rested his soul.”

A slew of people posted messages in honor of Millsap on social media, including friends, people who played basketball with him, and people who are engaged in CrossFit, both at Millsap’s gyms and across the country.

Crossfit Mosaic is one of the newest CrossFit affiliate gyms in central Florida, according to the gym’s website. Under contact info, Millsap’s email is listed. The gym opened on March 2, according to Millsap’s Twitter page.

The Crossfit community in central Florida is planning on a fundraising benefit for Millsap’s family. Find more info here.

Scroll down to see the police report, which is below all of the embedded Storify photos.