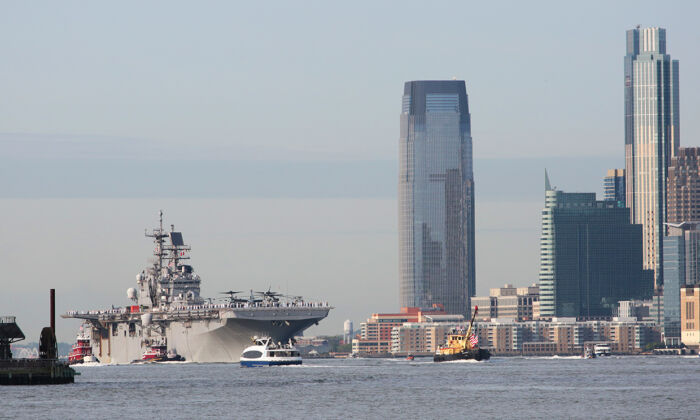 USS Bataan leads the Fleet Week vessel parade up the Hudson River. The Wasp-class amphibious assault ship is docked at Pier 88 and will be open to the public during Fleet Week. (Richard Moore/The Epoch Times)
US

Fleet Week Kicks Off in New York With Parade of Ships

New York put on a beautiful morning on May 25 to welcome visiting naval vessels in the city to celebrate Fleet Week.

After a two-year pause due to the pandemic, the event returned—leading off with the traditional parade of ships into New York harbor and then up the Hudson River.

Fleet Week is a celebration of the United States’ naval forces, including the U.S. Navy, U.S. Marines, and the U.S. Coast Guard.

The USS Bataan is a Wasp-class amphibious assault ship that can carry a mix of aircraft depending upon the warship’s mission.

Potential visitors are being asked to be prepared to show proof of COVID-19 vaccinations and wear a mask.

The vessels are docked at: