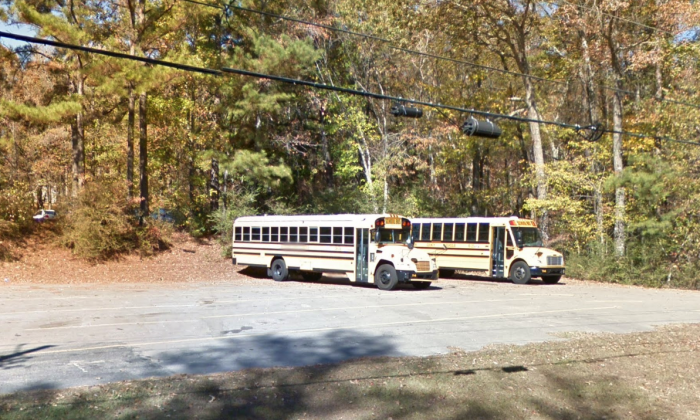 Two school buses outside Grantswood Community School, where a 5-year-old was abandoned on a bus for the day. (Screenshot/GoogleMaps/Screenshot)
US News

A 5-year-old boy was abandoned on a school bus for the whole day during freezing winter weather in Alabama, according to reports.

A bus driver has been relieved of his duties at the Jefferson County school, reported WBRC, while the school investigates.

Tayanna McKenzie said that she received a phone call just after 3 p.m., on Thursday, Jan. 18, telling her that her son had been left on the bus.

It was over six hours after he had climbed on board on his way to kindergarten.

“I get to the school, I could tell that my child’s been traumatized,” she said.

“It’s been 14, 18 degrees this morning and my child was left on the school bus. The bus driver dropped him back off at the school once he picked up his route to drop off this afternoon.”

McKenzie said her boy, Messiah, is doing okay, but she is demanding answers from the Grantswood Community School.

“He could have froze to death anything,” McKenzie said.

County School Superintendent Craig Pouncey confirmed to WIAT that the child had been left on the bus.

The school has suspended the bus driver, pending an investigation.

Walter Gonsoulin, the deputy superintendent of Jefferson County Schools told WBRC that they were taking the incident very seriously.

“I’m a parent myself,” he said. “We want to find out exactly what happened.”

“All of our drivers and employees are trained to walk throughout the bus to perform a safety check and that’s our expectation,” he said.

All school buses in the county are equipped with cameras.  According to WBRC, they continue to record for only a few minutes after the driver shuts the bus off.