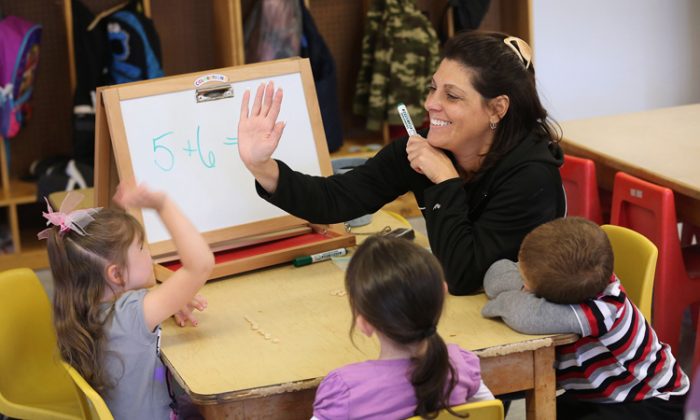 A teacher congratulates a child during a math lesson at the Head Start school in Woodbourne, N.Y., in September. New York is one of five states testing a new program to increase school hours and boost student achievement. (John Moore/Getty Images)
US

Longer school days are in the works in 2013 for a handful of states, as part of an initiative to raise the level of student achievement while making U.S. students more competitive internationally.

Massachusetts, Connecticut, New York, Colorado, and Tennessee will take part in the program, which adds a minimum of 300 hours to the annual curriculum. If the estimated 19,500 students in 40 schools experience measured benefits during the three-year pilot, more schools nationwide could see an increase in hours.

Funding for the increased time will come from federal, state, and local sources, with additional funds coming from contributors like the Ford Foundation and the National Center on Time & Learning (NCTL).

New London Public Schools, a district in Connecticut, is a participant in the program.
Superintendent Dr. Nicholas A. Fischer has experienced firsthand the benefit of extending curriculum. “I think it is very exciting prospect. It is something we did in Fall River, Mass., when I was superintendent there,” Fischer said. He added that the program was successful enough to be expanded, with the schools considered national models for increased student achievement.

Fischer said that spending more time in school provides a safe and secure environment for students before and after classes, on the weekends, and during summers. Adding 300 hours to the school year can be tailored to location.

Massachusetts 2020 is committed to creating more learning time in the state’s public education system. The group sees longer school days as making time for enrichment, teacher time, and partnerships with the community.

“It provides a way of engaging some students who may not be very well involved in school activities,” Fischer said, adding it also could help further a student’s interest in school.

NCTL, a nonprofit based in Massachusetts, is also dedicated to expanding time in school. According to the group, the United States stands out compared to other nations, as U.S. states have the freedom to “set their own education policies and funding methods.” Aside from the U.S. Department of Education’s (ED) policy and funding, education is a state and local responsibility.

With school partnerships and longer school days, according to Dr. Fischer, New London’s schools will invite a variety of groups from the community interested in working with students to meet with them, and they present programs to the students.

Exploratory activities, STEM activities, robotic projects, karate, drama, theater arts, Lego engineering programs, interaction with college students, and Odyssey of the Mind are just some of the partnerships Fischer cited. “There are all kinds of opportunities,” he said.

He added that sustaining funding over the long haul is important, as some volunteer while others expect to be paid. The important thing is to come up with a game plan and see what sticks.

“Not everything that you try works, so you have to go through a trial-and-error process, particularly in the first couple of years,” Dr. Fischer said.