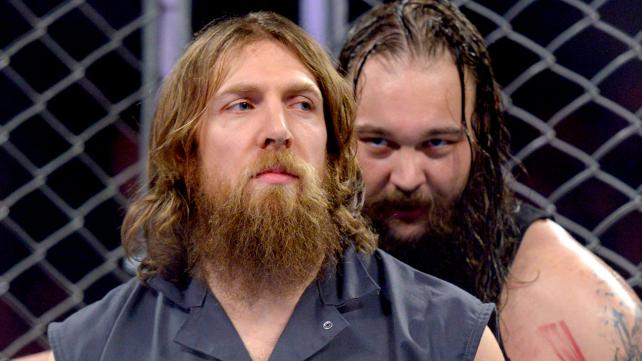 Daniel Bryan (in front) Bray Wyatt (in the back) (bing.com)
News

Top Five Matches that should take place before WrestleMania 31: #5

After Extreme Rules it got me to thinking about what could happen next in WWE? The next few days my papers will be about possible matches, and feuds that I believe should take place before WrestleMania 31. With that being said the first match on my list is a feud we have already seen, but with the way these two have blown up this rivalry could be even bigger this time around; Daniel Bryan vs Bray Wyatt.

Daniel Bryan vs Bray Wyatt (the first time around) was similar to the rivalry taking place right now between John Cena and Bray Wyatt. Bray Wyatt’s goal was to turn Bryan into a monster, and to have him become a member of the Wyatt Family. Bryan and Wyatt had, if not the best, then one of the best matches this year at the Royal Rumble in January. The feud between the two was very well played out. Daniel Bray actually joined the Wyatt family, but when he finally got Wyatt alone in a steel cage he turned on him, and showed that he was never really with the family.

There are two reason’s this rivalry could be even better this time around. The first reason is the WWE World Heavyweight Championship; the title would just add a level of importance to the feud. The second reason is the following’s that each wrestler has. The rivalry would not just be between Bryan and Wyatt, but between the Yes Movement and the Wyatt followers. The reaction that could possible happen when these two get in the ring could be amazing. Just picture it, half of the arena chanting “Yes”, and the other half singing “he’s got the whole world in his hands”.

This feud would be a great way for both men to follow up the feuds they have going on right now. The feud Bryan has going on right now with The Authority could potential last until Summer Slam. Wyatt’s rivalry with Cena probably won’t last until Summer Slam, but when it does end there are a number of people that WWE could put him with before a potential feud with Bryan begins. Bryan vs Wyatt is a match that I believe any WWE fan would want to see again. Then when you throw the Yes Movement, The Wyatt followers, and the Championship into the mix it only makes the potential for this feud that much bigger.