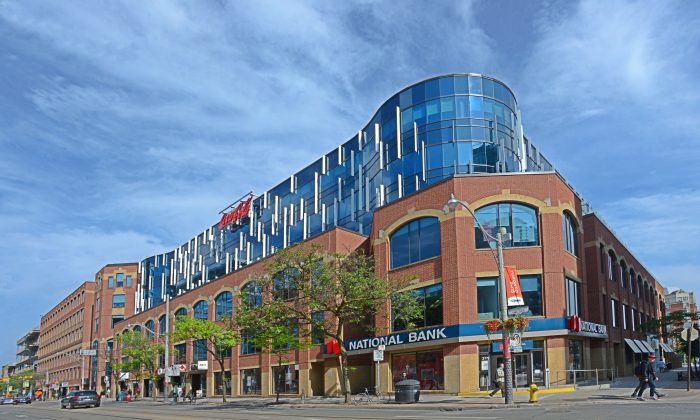 Last month, the City of Toronto announced it will be spending $5 million to complete due diligence work on a proposal to naturalize the mouth of the Don River.

The study will provide greater certainty for the city and provincial and federal governments on costs and risks associated with the naturalization plan. The plan involves the provision of flood protection to unlock the significant development potential of the Port Lands, including a 60-acre brownfield swath where up to 12 million square feet of office and retail space is planned as part of the second phase of Waterfront Toronto’s redevelopment mega-project.

A hefty chunk of that, 28 acres, is the former Lever Brothers factory site at 21 Don Roadway, at the eastern base of the river. Commercial developer First Gulf bought the property in January 2012 and is redeveloping it as Project 21, which could include six million square feet of office and retail space.

The idea, explains First Gulf president and chief operating officer John MacNeil, is for this to become a round-the-clock destination frequented by workers and area residents alike, given the site is surrounded by Leslieville and Lower Riverdale, and the burgeoning West Don Lands is just across the river.

“The lower east side is going to have the highest residential population growth anywhere in the city,” MacNeil notes. “That’s why we want to focus on retail, and more importantly on office, because that’s the piece missing in the area.”

Flood protection will be critical to the Port Lands redevelopment, as it was to the West Don Lands, where a giant land form—the basis for Corktown Common—now protects the new
neighbourhood and the eastern downtown from a catastrophic deluge.

But MacNeil stresses it’s equally as essential that the site be well-served by transit. “It’s crucial to its development as an office-retail destination,” he says. “You’re not going to have millions of square feet of office without robust public transit. It just won’t happen.”

The vision here is for the Port Lands to become a transportation hub, with two-way, all-day rail service on the GO Transit line that runs adjacent to the site; a stop here is also included in Mayor John Tory’s SmartTrack plan. And the Downtown Relief Line, if it comes to pass, would touch on the property, as well.

“In the fullness of time you’ll have a multi-modal transit site,” says MacNeil. “So we’re optimistic the province, federal government, and city will come through on all this public transit infra-structure.”

The plan also accounts for the extension of Broadview Avenue south from Queen Street, to connect with an extension of Queens Quay into the Port Lands, and the reconfiguration of the east-ern portion of the Gardiner Expressway to open up an area long cut off from the rest of the city.

First Gulf has been lauded for taking a proactive approach to community consultation, including establishing a stakeholders committee to determine what area residents and businesses want to see as part of the redevelopment.

“We’ve been trying to do the right thing and engage the community and community groups, as well as city planning staff,” MacNeil says. “It’s helping us come up with the vision, which isn’t finalized.”

Retail at Project 21 will be geared toward restaurant and entertainment use, “so people will come 24-7, 365, not just Monday to Friday 9 to 5,” MacNeil explains. “For those in the neighbouhood, it could be a place to have dinner. There’ll be ample opportunities to do those kinds of things.”

This isn’t First Gulf’s only action on the city’s lower east side. On King Street just west of Parliament Street, construction continues on the Globe and Mail Centre, a 17-storey, 500,000-square-foot LEED-certified office tower. The building ties in with neighbouring 333 King St E, the Toronto Sun’s headquarters, on top of which First Gulf added a glass office block for Coca-Cola, as well as a George Brown College campus.

“What you have on those four acres is a true mixed-use development,” MacNeil says.

Farther out in the GTA, the company has more than one million square feet of office projects under construction, including a 100,000 square-foot LEED Gold office in Oakville, and the third phase of First Meadowvale Centre, a 100,000-square-foot office building in Mississauga.

First Gulf offers design-build and project management services for office, industrial, mixed-use and retail developments, and it handles its own in-house leasing, planning and development, and construction. The company also serves as a general contractor for other firms, and is currently building two rental apartment buildings in Toronto and Mississauga.

Back downtown, First Gulf is working on plans for a site at 25 Ontario Street, on the south side of Adelaide Street.

“It’ll tie in with the whole resurgence of that area,” he says. “I think companies like Coca-Cola are starting to really appreciate the vibe of the lower east side. It’s got more of a gritty honesty to it than on the west side, and people are really starting to enjoy it. In fact it’s my prediction that the east side is where you’re going to want to be. It will far eclipse the west side.”