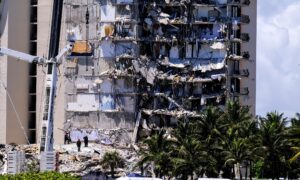 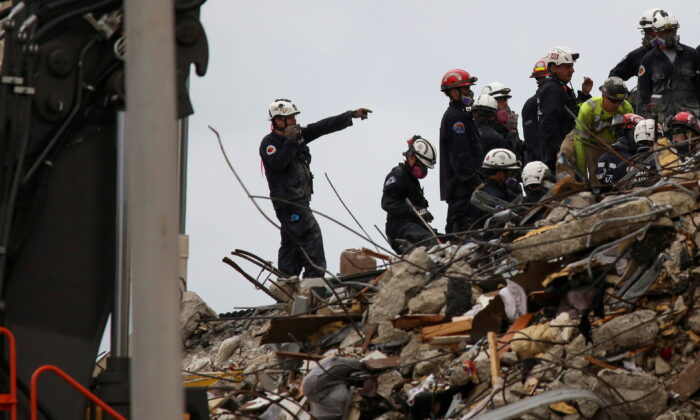 Rescue personnel continue the search and rescue operation for survivors at the site of a partially collapsed residential building in Surfside, near Miami Beach, Fla., on June 30, 2021. (Marco Bello/File Photo/Reuters)
Florida

The death toll from the collapse of a Florida condominium tower rose to 22 on Friday. Four more bodies were found in the rubble, including the 7-year-old daughter of a Miami firefighter. A second residential building was ordered to be evacuated after it was deemed unsafe.

“Our hearts and prayers are with the families affected by this horrific tragedy,” said Miami Fire Rescue Chief Joseph Zahralban. “We can confirm that a member of our City of Miami Fire Department family has lost his 7-year-old daughter in the collapse. She was recovered last night by members of our Urban Search and Rescue Team, Florida Task Force 2.”

“We ask that you respect the privacy of the immediate family as well as our Fire Department family while we grieve our loss and support our own,” he added, according to Local1o News.

A first responder told the outlet that rescuers brought her to the father, who wrapped his daughter’s corpse with his jacket and placed an American flag on the stretcher. Then he, his brother, and other firefighters escorted the body through police officers and firefighters who were lining up on the roadway.

Miami-Dade County Mayor Daniella Levine Cava said that the effort made by first responders is taking a toll on them and asked everyone to keep praying and thinking about them.

“They truly represent the very best in all of us and we need to be there for them as they are here for us,” Levine said.