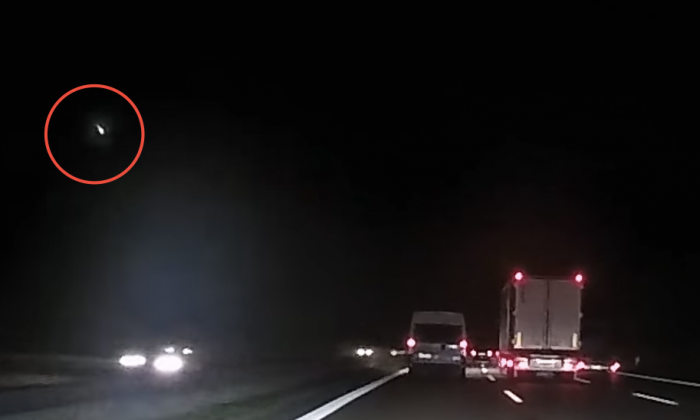 A fireball is highlighted in this screengrab of a video taken near Dresden on November 14, 2017 (YouTube/heiko böhme)
Europe

When a fireball was spotted speeding through the skies over Germany, police and public were mystified.

Police in the southern city of Stuttgart said they had received several phone calls regarding an unidentified light speeding through the sky on Tuesday, Nov. 14.

“We could not tell what the bright light was,” a police spokesman said, according to Stuttgarter Zeitung.

German air traffic control enigmatically told the newspaper: “We can only say that it was not an aircraft.”

One dashcam video posted to YouTube shows a streak of light that ebbs and fades, like a fireball.

The footage was taken on the autobahn near Dresden.

Soon after, however, similar reports began to surface in neighbouring countries, particularly in France.

Dashcam footage in the town of Colmar, Alsace, in the northeast of France shows a fireball tracing across the sky at approximately 5:45 p.m.

One eyewitness told local Alsace DNA: “A very big fireball just crossed the sky while I was driving in the forest between Haguenau and Surbourg. It was blue and white. It was super impressive.”

Another witness, whose name was not given, saw the object cross the sky around Colmar. “At first it was a huge trail of blue violet then the colors became orange, red. It was really long and amazing!”

“I saw a huge thing, like a blue ball with a green tail,” a resident of Niederbronn-les-Bains, told France Bleu.

“Given the evidence, there is probably a ‘meteor’, specifically a ‘fireball'” Jean-Yves Marchal from the Planetarium at the University of Strasbourg told France Bleu.

Eyewitnesses were able to fill in a special online form used to collect information on meteors, run by French organisation Vigie-Ciel. The information was then used to create a map of the sightings, and to calculate the path of what they say was a meteor.

Vigie-Ciel said it had received 1,874 eyewitness reports, and calculates that the fireball flew due east over southern Germany, past the city of Frankfurt, for what appears to be approximately 150 km , before disappearing.