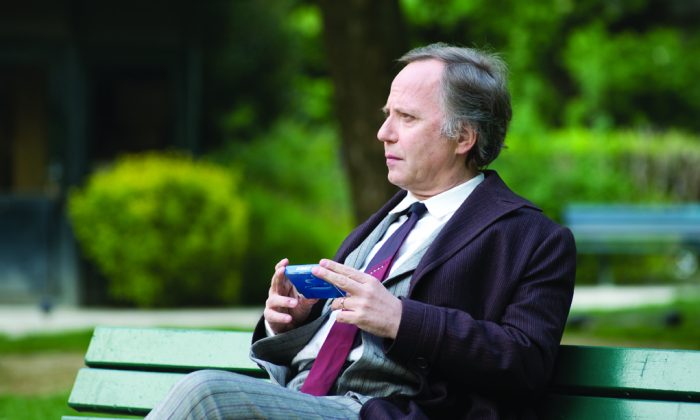 Fabrice Luchini is a sympathetic figure as a privileged middle-aged man in “The Women on the 6th Floor.” (Strand Releasing)
Entertainment

Film Review: ‘The Women on the 6th Floor’

The Help In France
By Joe Bendel
Print

It was a huge French box-office hit, portraying domestic servants in the 1960s. It could be called France’s “The Help,” though it was released there well before the reigning American sleeper hit.

In the French film, the maids are Spanish and they are also great fun to be around. A middle-aged stockbroker learns this firsthand in Philippe Le Guay’s “The Women on the 6th Floor.”

Jean-Louis Joubert has lived his entire life in his family’s stately Parisian home, but the sixth floor might as well be another country—a distant province of Spain. It is there that his maid and the other neighborhood domestics rent single-occupancy rooms. Frankly, the conditions are pretty ugly up there, but Joubert would not know. His building manager handles all the upstairs details.

However, when the family’s longtime Breton maid quits, her Spanish replacement makes quite an impression on him. Pretty in a warm, earthy way rather than vacuously beautiful, Maria Gonzalez is just about everything his onetime trophy wife (or “potiche”) Suzanne is not. Suddenly, he is fixing the sixth-floor plumbing and finding jobs for Gonzalez’s friends, all of which Joubert’s family finds a little strange.

“Floor” obviously addresses issues of upstairs-downstairs class distinctions, immigrant living standards, and even human rights under Franco (who was not dead yet at this time), but its politics are muted enough that they can be easily ignored by those so inclined. More than anything, it is a film about a man learning to finally be comfortable in his own skin.

Fabrice Luchini is absolutely perfect as Joubert. Though it might sound thematically similar to his role in François Ozon’s “Potiche,” there is nothing shticky about his work here. Warm and winning, it is a refreshingly sympathetic portrait of a late-middle-aged bourgeoisie man, quite a rarity in contemporary cinema.

Likewise, Natalia Verbeke is equally charming (a word quickly at risk of gross overuse when discussing the film) as the heartsick but still spirited Gonzalez. In contrast, there is no need to look up “charming” in a thesaurus for Sandrine Kiberlain’s Suzanne Joubert, but she is appropriately icy and brittle as the suspicious, pampered wife.

Gentle and engaging, “Floor” is exactly the sort of foreign film that can break out into the relative mainstream. Luchini’s crowd-pleasing work should also considerably boost his standing here in America.

Recommended for general audiences (particularly those who really have to be cajoled into seeing a subtitled film), “The Women on the 6th Floor” screens on Friday, June 20, at Tompkins Square Park as part of Films on the Green.

Joe Bendel writes about independent film and jazz and lives in New York. To read his most recent articles, please visit jbspins.blogspot.com