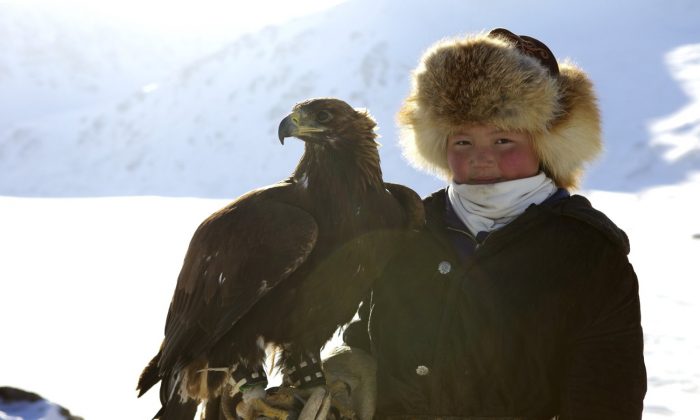 A girl and her eagle
By Joe Bendel

Aisholpan Nurgaiv is a 13-year-old ethnic Kazakh nomad in northwest Mongolia, who became the sort of internet sensation every hipster aspires to be; a picture of her with her father’s golden eagle went viral. As her eagle-handling skills developed, she became the first girl to ever compete in the ancient Golden Eagle Festival. (By the way, she is also a straight-A student.}

Otto Bell managed to arrive in the Altai Mountains (the most remote, least populated region in the world) in time to document her hunting milestones in “The Eagle Huntress.”

Anyone who watches “The Eagle Huntress” is pretty much guaranteed to feel great by the time the closing credits roll.

Young Aisholpan always had more affinity for her father Nurgaiv Rys’s hunting and herding than traditional women’s roles. Although he is a devout Muslim, Nurgaiv is progressive enough to teach his daughter traditional hunting techniques. She could not ask for a better teacher, considering he twice won the Golden Eagle Festival and placed highly on several other occasions.

Recognizing Aisholpan’s abilities, Nurgaiv decides it is time to corral a wild eaglet of her own in the first of the film’s three centerpiece sequences.

Eventually, Nurgaiv allows the increasingly proficient Aisholpan to enter the annual contest, despite his understandable fatherly concerns. She is barely a teenager—and many of the competitors will not welcome her trailblazing participation. However, the real test of Aisholpan’s rapport with her eagle will come during their first hunt.

Words like “inspirational” often inspire kneejerk snark in response, but anyone who watches “The Eagle Huntress” is pretty much guaranteed to feel great by the time the closing credits roll. Aisholpan is a terrific kid, whose charisma absolutely radiates off the screen. Nurgaiv is also totally cool, giving his daughter exactly the sort of encouragement she deserves. Even her grandfather is surprisingly hip, offering his blessing for her eagle hunting training.

The soaring eagles and the Altai vistas are as stunning as you could imagine. Yet, the really exciting thing about the film is the groundbreaking significance of Aisholpan’s eagle hunting aspirations. It represents open-minded social change that respects and even strengthens cultural traditions. After all, the estimated ranks of eagle hunters have dwindled to something in the neighborhood of 250. Frankly, Aisholpan is exactly what they need.

Since “The Eagle Huntress” screened in Sundance’s kids section, a lot of press and programmers probably had to play catch-up after Sony Classics swooped it up. The distributor knew what it was doing, because this doc is going to catch-on in a huge way. It is just the sort of film that leaves you with a big dopey grin on your face, so word-of-mouth will be rapturous.

This is tremendously accomplished filmmaking on a technical level, as well as a wonderful trip to one of the furthest flung corners of the world.

Enthusiastically recommended for mainstream audiences of all ages,  “The Eagle Huntress” opened  Nov. 2 in New York, at the Landmark Sunshine downtown and the Lincoln Plaza uptown.