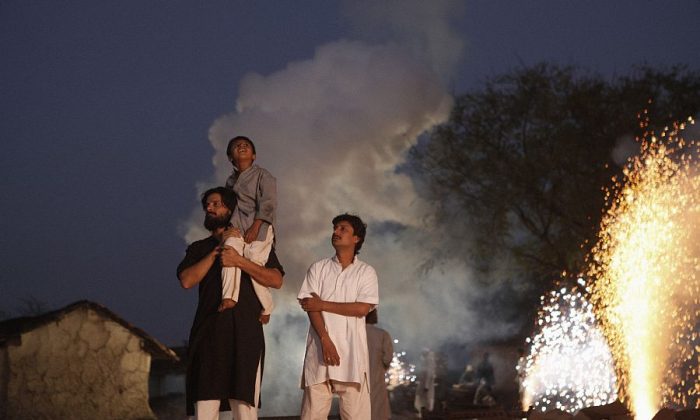 A scene from “Gangs of Wasseypur,” a tale of revenge spanning three generations. (Cinelicious Pics)
Entertainment

For three criminal clans in India’s coal country, life is defined by family and their vendettas. The two are not mutually exclusive in Anurag Kashyap’s epic “Gangs of Wasseypur.”

The family tradition began with Shahid Khan, who robbed British trains while masquerading as an infamous Muslim dacoit Sultana. Expelled by the real Sultana’s clan, Khan toils in the Dhanbad coal mines, working for the ruthless Ramadhir Singh as his chief muscleman. Mindful of Khan’s ambitions to replace him, Singh murders Khan and would have killed Khan’s young son Sardar too, if he weren’t rescued in the nick of time.

As a boy, Sardar Khan swears vengeance against Singh. Then as a man and budding crime lord, he is in a position to take it. However, Singh is shrewd enough to call a temporary truce, while forging a secret alliance with the heir to his father’s old nemesis, Sultan Qureshi. Distracted by the demands of an increasingly complicated family, consisting of five sons from two wives (and no divorce), Khan effectively defers his vengeance to the next generation.

Spanning three generations and seven decades, it is a big film by any measure

In Part 2, there is a changing of the guard within the Khan family. Leadership duties will fall upon Khan’s hashish-addicted second son, Faizal Khan. Nobody expects much from the spare heir, least of all his mother, but when he starts killing, his ferocity makes everyone sit up and take notice.

Frankly, “Wasseypur” is truly light years removed from Kashyap’s last film to find American distribution, “That Girl in Yellow Boots.” Spanning three generations and seven decades, it is a big film by any measure. Part 1 is a bit slow at times, because of all the grudges and betrayals it must establish. A dark brooder punctuated by moments of grandly operatic violence, the tone of the first half could be described as a provincial Indian “Godfather.”

However, the second part segues into “Scarface” territory, as Faizal Khan goes medieval on everyone standing in his way. In fact, “Wasseypur” steadily builds momentum throughout its daunting five and a half hours, culminating with two spectacular action sequences, including a hospital shootout that could hold its own with John Woo’s “Hard Boiled.”

Adding further depth, “Wasseypur” offers some intriguing social context, such as the post-Raj cronyism and corruption that Western audiences rarely see reflected on film. It is also fascinating to watch Singh use trade unions and his political office to build a criminal syndicate.

Likewise, “Wasseypur” clearly attributes the Pashtun Khan organization’s local popularity to its willingness to stand up to the bullying Qureshi Muslim establishment. Although there are no traditionally splashy musical numbers in “Wasseypur,” Kashyap shrewdly uses era-specific Bollywood hits to help delineate the passage of years for Indian audiences.

Nawazuddin Siddiqui’s feral, drug-addled Faizal Khan is all kinds of unsettling. Many viewers will find themselves actively rooting against his protagonist during the second half. Still, that kind of strong reaction means he is doing something right.

Reema Sen is also quite the domestic femme fatale as wife No. 2. Yet, it is Tigmanshu Dhulia, better known as a screenwriter and director, who delivers the most nuanced supporting turn as Singh.

“Wasseypur” would be impressive simply for its ambition, but Kashyap rises to the challenge, staging some distinctly stylish action sequences and cogently telling a richly intricate story, based on historical events in the region. It could even lay a claim to being the Great Indian Crime Story, encompassing multiple generations, ethnic groups, and religions in its nefarious dealings.