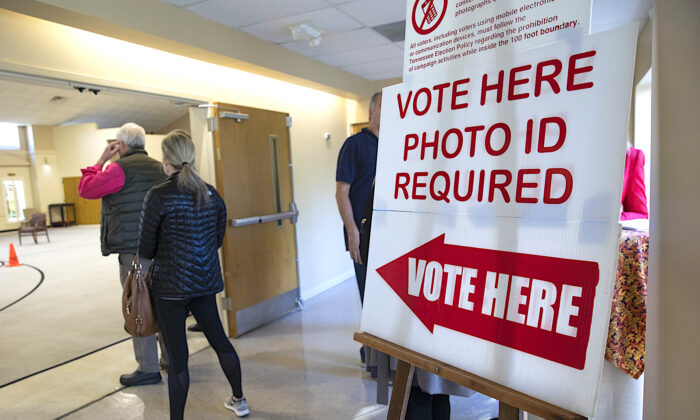 Fighting the Good Fight for Election Integrity in Franklin, Tennessee

It wasn’t about Donald Trump. It was about saving our Republic, the speakers kept repeating, and that was true.

The perspective at the Election Integrity Symposium given by Tennessee Stands in Franklin, Tennessee, on Thursday evening was aimed at the future, at making sure we had transparent and fair elections in our country going forward—something we arguably, and in a way astonishingly, never have had.

Just who did win, for example, the presidential election of 1960 (Nixon versus JFK)? In truth, nobody knows for sure, to this day. Bizarre as it sounds, most of our elections seem to a great degree decided by news media that “call” the elections at certain points from their “decision rooms.” Remember the consternation when Fox “called” Arizona for Biden? Many doubt to this day the accuracy of that “decision.”

So, not surprisingly, the assumption of many in attendance at Thursday’s event, and among those speaking, was that the 2020 presidential election “had a problem,” or, as Tennessee Stands founder Gary Humble put it—I’m paraphrasing here—“We know, and they [Democrats] know, and they know that we know, and we know that they know, that we know”… or something like that… regarding what happened in 2020.

The featured speakers were Garland Favorito, an IT expert from Atlanta environs and estimable leader of VoterGA, who has the most detailed knowledge of the myriad voting machines of anyone I have encountered; Bennie Smith, the Shelby County (Memphis) election commissioner, speaking ex officio, who also has great insight on election equipment; and Mark Finchem, member of the Arizona House and currently a candidate for secretary of state of that state.

Finchem has become a national figure by being one of those leading the charge for election integrity across the country. He had with him a sample ballot he has been attempting to have states adopt—and some 17, he says, already have made pledges to do so—that by itself would go a long way toward ensuring that integrity.

The ballot is a piece of high-tech—yet inexpensive—watermarked paper that, although of course larger, resembles the cash produced by the Treasury, with similar built-in resistance to counterfeiting. It would also have QR codes and a numbering system that would make certain the number of ballots counted would actually match the number originally distributed—something of a first in our elections.

(Remember the quote attributed to Stalin about how it isn’t who makes the votes, but who counts the votes that’s important. Yes, I know it’s probably apocryphal, but that doesn’t mean its substance isn’t true.)

The speakers were unanimous in their opinion that in order to have election integrity, we absolutely must abjure machines and go back to the hand-counting of ballots.

On the other hand, what the Democrats have on offer—more mail-in voting, drop boxes, no voter ID—is an open prescription for corruption, and racist as well, because it’s premised on the repellent assumption that black people can’t vote like the rest of us. Somehow that supposed benighted minority can’t get identification, although they have to drive, get on planes, open bank accounts, and dozens of other things for which they obviously do need it, and everybody knows this.

In other words, it’s a big lie, and a particularly noxious one. In fact, it’s hard to understand why they are proposing these things—unless for entirely corrupt purposes—when both The New York Times and Barack Obama were opposing them not long ago.

So, another Thursday night in Franklin, Tennessee. The fight for election integrity goes on. And, yes, it is the key battle in the fight for our Republic.