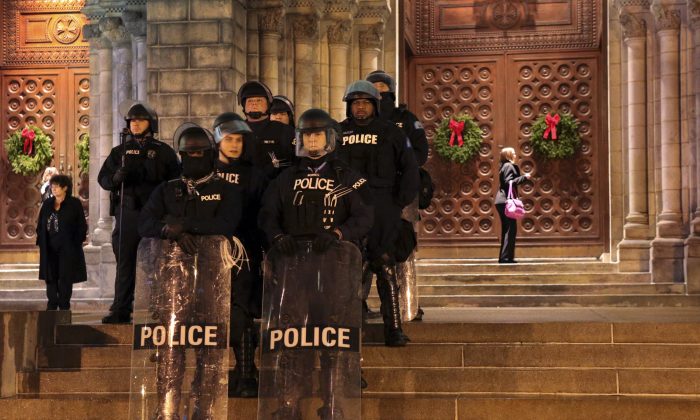 St. Louis Police officers guard the entrance to the Cathedral Basilica before Midnight Mass as protesters held a candlelight vigil on Wednesday, Dec. 24, 2014, in St. Louis. The mayor of the St. Louis suburb of Berkeley urged calm Wednesday after a white police officer killed black 18-year-old Antonio Martin who police said pointed a gun at him, reigniting tensions that have lingered since the death of Michael Brown in neighboring Ferguson. (AP Photo/St. Louis Post-Dispatch, Robert Cohen)
US

Protesters angry over the verdict over the Michael Brown killing attempted to storm the police headquarters in downtown St. Louis, according to reports on Wednesday.

The protesters said they were trying to “reclaim” the department for residents of Ferguson.

Fox-2 reported that about 15 people entered the police headquarters’ lobby at around 10 a.m. local time and read from a list demanding.

“We are informing you that the police department is scheduled to be reclaimed by its citizens today, December 31, 2014,” the said the notice, adding about “transforming the police force into a militarized occupying force.”

Users on Twitter posted photos and videos of the confrontation. Some people apparently were pepper sprayed by police.

Fox reported four females and one male were arrested. They were charged with Trespassing and Peace Disturbance.

About 75 protesters in total were involved in the sit-in and attempt to storm the department.

Protesters posted an “eviction notice” on the door of the police station, citing reasons why Chief Sam Dotson and others should be removed. When several tried to enter the building, officers blocking them eventually used pepper spray to push the crowd out.

Protesters say they wanted to occupy the building for more than four hours, representing the time Michael Brown’s body was in the street after he was fatally shot by a Ferguson officer on Aug. 9.

Outside the STL Police HQ Occupying for 4 and half hours #ferguson #stl pic.twitter.com/m0i0BaOjtw