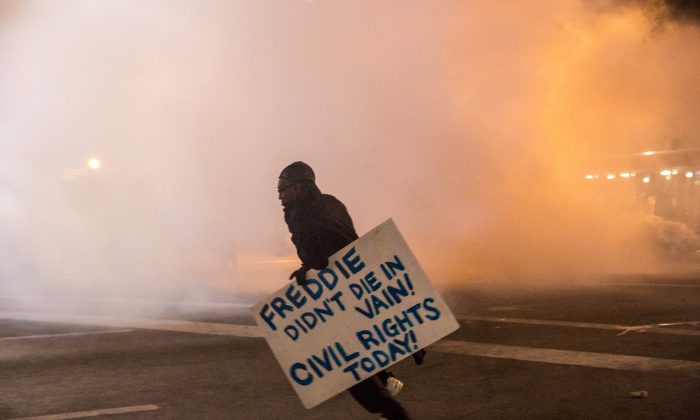 A protester walks through tear gas as police enforce a mandatory, city-wide curfew on April 28, 2015 in Baltimore, Maryland. (Andrew Burton/Getty Images)
US News

Mac Donald traced the increase in violence to “suggestions that the police are the biggest threat facing young black males today.”

This loss of trust in police became prominent after the shooting of Michael Brown in Ferguson, Missouri, on Aug. 9, 2014. And as police felt they became targets, they withdrew from active policing.

On July 12, USA Today published a report that documents the “Ferguson effect” in Baltimore, although there it might more accurately be called the “Freddie Gray effect,” after the death of Gray in police custody on April 12, 2015.

Six officers were charged in the death from injuries Gray suffered while riding in the back of a police van, although none of the officers were convicted. Following news of Gray’s death, Baltimore suffered waves of rioting.

USA Today quoted an ex-Baltimore police officer, who described the response from police: “They realize that if they do something wrong, they’re going to get their head bit off.”

According to the article, in the space of a few days in the spring of 2015, “officers in nearly every part of the city appeared to turn a blind eye to everyday violations.”

What millions of police records in Baltimore show is that police are responding to calls as quickly as ever, but they are initiating far fewer stops themselves. Gun violence has soared.

Baltimore is believed to have had 150 homicides in 2018, and in 2017, it was the deadliest city per capita in the nation, according to the article.