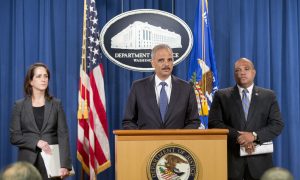 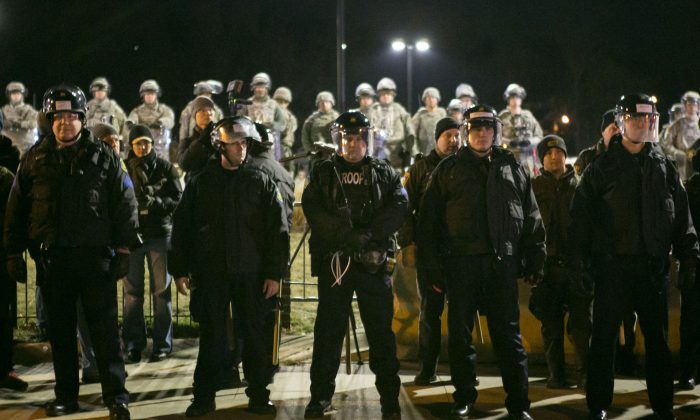 The police and the National Guard stand alert as activists across the street stage a protest in front of the Ferguson Police Station, Mo., on Nov. 25, 2014. (Benjamin Chasteen/Epoch Times)
US

Evidence found during the recent investigation by the U.S. Department of Justice shows that racism among Ferguson, Missouri officials is so endemic that racial slurs are made over work email. The racist emails, dating back to 2008, were circulated among city officials without consequence until yesterday.

The report, which was released on March 4, includes a sampling of emails that report authors describe as “illustrative” of racial bias among current Ferguson officials. The emails were sent, with rare exception, via official City of Ferguson email accounts and likely during work hours.

Individuals involved are not named, but the DOJ does state that every email they gave as an example involved supervisors and commanders of the Ferguson Police Department patrol and supervisors of court operations. Both groups of people are in positions to promulgate bias and racism simply through example. Police supervisors are responsible for overseeing the conduct of the police, while court supervisors have significant influence over court operations and the management of individual cases.

Since the report’s release on Monday and revelations about the emails, Ferguson Mayor James Knowles III said steps are being taken to correct problems.

“We must do better not only as a city, but as a state and a country,” Knowles said to The Associated Press.

Knowles said three employees were responsible for the emails. One was fired Wednesday, and the other two are on administrative leave pending an investigation.

An email from November 2008 stated that President Barack Obama wouldn’t hold the office of president for very long because “what black man holds a steady job for four years.”

In March 2010, an email involving a story about child support mocked the speech and family stereotypes of blacks with antiquated speech more reminiscent of the year 1810. At one point in the email, which reads like slave dialogue from the book “Gone With the Wind,” the individual wrote: “I be so glad that dis be my last child support payment! Month after month, year after year, all dose payments!”

The sampling from 2011 depicts a slew of emails tantamount to a disturbing train wreck of ignorant rants.

In April 2011, a Ferguson city official wrote an email that depicted President Barack Obama as a chimpanzee.

A month later, in May 2011, an official related a racist, misogynist email about a black woman who got an abortion in a New Orleans hospital, and then received a check in the mail for $5,000. The punchline manages to insult the fictional woman and baby while depicting all blacks as criminals.

“She phoned the hospital to ask who it [the check] was from. The hospital said, ‘Crimestoppers.'”

In June 2011, one official brought other races and dogs into the fray. The email joked that a man was trying to file for welfare benefits for his canines because they are “mixed in color, unemployed, lazy, can’t speak English and have no frigging clue who their Daddies are.”

The First Lady was also the butt of a joke in October 2011, when an email with a photograph of bare-chested women dancing in Africa was captioned “Michelle Obama’s High School Reunion.”

In April 2011, a Ferguson city official wrote an email that depicted President Barack Obama as a chimpanzee.

Examples of offensive emails from 2011 given by the DOJ finished off with a slight toward Muslims. The December 2011 communique included more than one joke based on “offensive stereotypes about Muslims.”

The sampling of emails included in the report is concluded with an annotation that “many additional email communications” were discovered during the months-long DOJ investigation that included racial, ethnic, and other types of bias. They found no evidence that any of the court clerks or police officers who sent the emails were disciplined. They also found no evidence that people receiving the emails offer a rebuke to the sender or reported them through official channels.

Quite to the contrary, the typical action taken instead by those who received the emails was that they forwarded them along to others and often expressed their amusement.

In 2012, one city manager sent an email with an offensive Latino stereotype, then immediately sent another email saying that he hadn’t seen the offensive portion of the message. He apologized for the “inappropriate and offensive” message.

The DOJ stated that the evidence of blatant racism found in the emails is on par with first-hand accounts from members of the community which describe the use of “racial epithets” by some members of the Ferguson Police Department when dealing with the public.

In addition to racism, the DOJ said in a footnote of their report that they also found evidence that the the Ferguson Police Department “tolerates sexual harassment” and “responds poorly to allegations of sexual harassment that have been made by female officers.”

The Ferguson Police Department has made no official response.