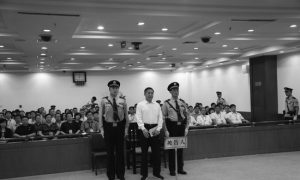 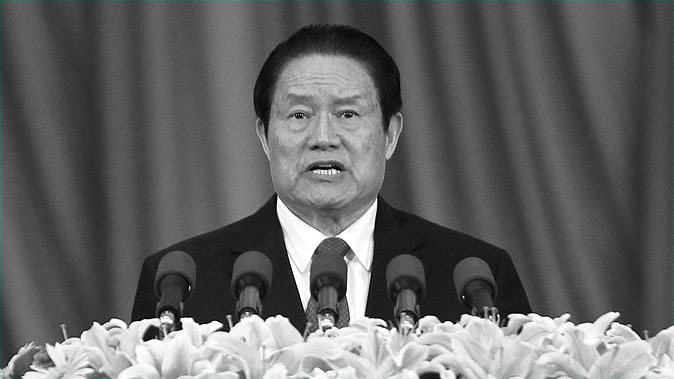 Zhou Yongkang, the former security czar, and Bo Xilai, a member of the Politburo, were said to have “engaged in political activities outside the Party”—tantamount to an admission that they had formed a conspiracy.

The case was highlighted by Zhou Qiang, the head of the Chinese Supreme People’s Court, in the report on legal work in China in 2014. Zhou said that in order to “strengthen discipline education and a clean judiciary, we must fully grasp how Zhou Yongkang and Bo Xilai trampled on the rule of law.” The “harm” caused by their conspiring needed to be recognized, he said.

“We must thoroughly expunge the vile influence that Zhou Yongkang had in violating the law and discipline of the the courts,” Zhou Qiang said. The term “discipline” usually refers to adherence to Communist Party dictate.

The Supreme People’s Court’s comments on the Zhou and Bo cases tracks with revelations that came out in the Hong Kong-based, pro-Beijing magazine Phoenix Weekly, which said that Zhou and Bo plotted on how to “completely negate Deng Xiaoping’s theory and implementation of reform and opening up,” installing instead a neo-Maoist regime, and “do something big.” Analysts interviewed said that, in China, talk of overturning the Party’s existing ideological system and reverting to a Maoist formulation of class struggle is on par with planning a coup d’état.

We must thoroughly expunge the vile influence that Zhou Yongkang had in violating the law and discipline of the the courts.
— Zhou Qiang, associate justice and president, Supreme People's Court

The purge of Bo and Zhou was part of the most noteworthy shift in Chinese politics in a generation—a sea change that is still taking place, as Party leader Xi Jinping continues to strengthen his grip on the levers of power in the Party, security apparatus, military, and over the state-run economic sector.

Both officials were part of a network tied to the former regime leader Jiang Zemin, who ruled from after the Tiananmen Square massacre in 1989, until, officially, 2002. But Jiang retained enormous influence over the next decade through a vast network of clients and cronies, among them Zhou Yongkang and Bo Xilai.

The remark that the two engaged in “political activities outside the Party” is the second time that official sources have partly corroborated a story that Epoch Times reported as early as 2012: that Bo and Zhou were part of a plot to seize power, sidelining Xi Jinping’s ascension to Party rule at the 18th National Congress in November 2012.

These reports were based on information obtained by Party insiders with deep knowledge of the operations of the regime, though the idea was widely disregarded among many Western observers—until the dominoes started to fall, with Zhou Yongkang formally taken down in July 2014. Zhou was widely seen as untouchable, given that the purge of a former member of the Politburo Standing Committee—the Party’s top nerve center—has been extremely rare in Communist Party history.

Duowei, a nominally overseas Chinese media outlet, wrote, “The leadership has faced … what is, since the founding of the Party, the biggest ‘nest of plotters’ and ‘cliques,’ and it has rocked the Party to its core.”

Xia Xiaoqiang, a political columnist with the Chinese edition of this newspaper, wrote in a recent column that the recent accusations against the two officials “are a sign that the case against Zhou Yongkang has just become more serious. And the word ‘political’ implies a coup.”

Xia wrote that the case may continue to percolate, eventually implicating the political godfather and protector of Zhou and Bo, former Party boss Jiang Zemin, who is approaching his 89th birthday.