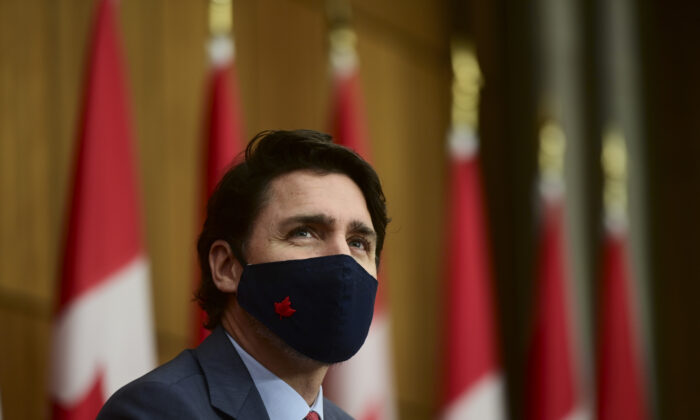 Prime Minister Justin Trudeau provides an update on the COVID pandemic during a press conference in Ottawa on Nov. 13, 2020. (The Canadian Press/Sean Kilpatrick)
Canada

Feds to Give $1.5 Billion to Help Canadians in Hard-Hit Sectors Train for New Jobs

OTTAWA—Prime Minister Justin Trudeau says the federal government will send $1.5 billion in job-training support to the provinces and territories to help Canadians in industries hit hard by the COVID-19 pandemic.

The funding will help laid-off workers in sectors like construction, transportation and hospitality re-enter the workforce by bolstering access to skills training and employment services, Trudeau said Friday.

“Now more than ever the labour market is evolving quickly and workers need to be able to develop new skills,” Trudeau said.

The money comes at a critical time, with a new survey from Statistics Canada finding nearly one-third of businesses do not know how long they can keep going under existing conditions brought by the second wave of COVID-19.

Nearly 40 percent of businesses have laid off staff since March and nearly one in five report they will be compelled to take drastic action in less than six months if cash flow does not improve.

Meanwhile the unemployment rate barely budged last month, sitting at 8.9 percent compared with 9.0 percent in September, to leave some 1.8 million people out of work.

Canadian Chamber of Commerce chief economist Trevin Stratton said the outlook for business owners is “grim” and called for sector-specific support to help the hospitality and arts-and-entertainment industries.

“The one-size-fits-all approach to support programs is not sustainable through 2022, and it may not be particularly useful at this stage of the pandemic,” he said.

While the government has pledged to sit down with the airline industry to start hammering out a bailout deal, Ottawa has shied away from sector−specific support, instead preferring programs available across industries.

A revamped COVID-19 aid package now before the Senate as part of Bill C-9 would extend a federal wage subsidy until next summer, expand a popular business loan program and redo a program for commercial rent relief.

The rent subsidy, whose precursor was widely criticized for requiring an opt-in from landlords who tended to shy away from it, now cuts them out of the process.

However, the rejigged program includes a requirement that entrepreneurs pay their rent before applying, putting the subsidy out of reach for many cash-strapped stores.

Facing backlash from industry, Finance Minister Chrystia Freeland promised Thursday to pass followup legislation that would scrap that stipulation, and to instruct the Canada Revenue Agency to disregard it in the interim.

While the rent subsidy will be retroactive to Sept. 27—when the original Canada Emergency Rent Subsidy expired—Trudeau said he urges swift passage of the bill, with many business owners barely scraping by amid renewed local lockdown orders.

“I told the premiers last night that anything they can do to encourage the senators that represent their jurisdiction to move forward quickly on passing Bill C-9 will be a big relief to business owners,” Trudeau said Friday.

Meanwhile, the $1.5 billion for job training—$614 million of it for Ontario—will flow to the provinces and territories under their workforce development agreements via a delivery network of employment service centres.

“I’m particularly concerned for those who already, even before the pandemic, face barriers to employment because of their race, gender or disability,” she said.

The funding comes on top of the $3.4 billion Ottawa is transferring to the provinces and territories in 2020−21 under workforce and labour market development agreements.