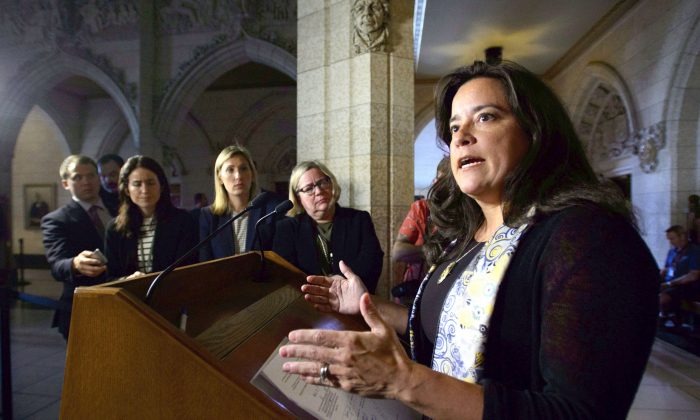 Justice Minister Jody Wilson-Raybould makes an announcement regarding family law on Parliament Hill in Ottawa on May 22. (The Canadian Press/Sean Kilpatrick)
Canada

OTTAWA—The federal government has introduced new family-law legislation aimed at helping families settle disputes outside court, encouraging better enforcement of child support and preserving the well-being of children who are caught in the middle.

Many of the proposed changes—the first major update to Canada’s family laws in 20 years—seek to consider the “best interests” of children, said Justice Minister Jody Wilson-Raybould.

The legislation proposes “child-focused” language, which means replacing terms like “custody” and “access”—terms that have been known to fuel conflict between parents—with “parenting orders” and “parenting time.”

The government is moving away from terms like “shared custody” because in some cases, if it’s not in the best interest of the child, it’s no longer the goal, Wilson-Raybould said.

The government wanted to move away “from what some have deemed adversarial language where there’s a winner and a loser, to moving towards parenting, orders, and parenting time that more specifically address the duties and responsibilities of parents themselves,” she told a news conference on May 22.

The proposed changes would include a list of factors that a court must consider when deciding what would be in the child’s best interest, such as the physical, emotional, and psychological safety and well-being of impacted kids, among other factors such as linguistic, cultural, and spiritual heritage, including Indigenous heritage.

NDP justice critic Murray Rankin said he supports the goals of the family justice bill, particularly the elements that encourage protecting the best interests of affected children and the consideration of family violence in deciding parenting arrangements.

The legislation would require courts to take family violence and a number of other factors into account when deciding parenting arrangements.

Rankin said he plans to study the bill in detail to determine whether the proposed measures are the best way to reach these goals.

The Conservative opposition said it will also review the legislation to ensure it’s in the best interest of Canadians.

“Any measure to ease the trauma of divorce for children is a good thing,” said Andrea Mrozek, the family program director at Cardus Institute, a faith-based think tank.

Mrozek said her organization hears a lot about the “best interests of the child,” and she wonders how much will change. Neither courts nor lawyers have been ignoring the best interests of children, regardless of what the Liberals are saying, she said.

In addition to changes to the Divorce Act, Mrozek said there needs to be a general recognition of the power and importance of marriage, particularly for children.

“I don’t know that a bill to change the Divorce Act is going to address what is a cultural matter, and that’s the nature [of how] we approach marriage today.”

Wilson-Raybould said the proposed bill would encourage parties to use mechanisms other than the court system, such as family dispute resolution and mediation services—a measure welcomed by Mrozek if it means avoiding an adversarial court battle.

“The proposed amendments will also encourage the parties, where appropriate, to use family dispute resolution options such as mediation or collaborative law to resolve their disputes outside the court,” Wilson-Raybould said.

“Family law professionals play an important role in helping their clients to learn about non-court options. The bill expands duties for regular advisers to helping encourage their clients where appropriate to come to fair and amicable resolutions outside the court room.”

The proposed measures, she added, would also give courts the option of accessing more information about the income levels of parents.

In some cases, Bill C-78 would permit an application to the Canada Revenue Agency when determining the appropriate amount for settlements both in and out of court, and when seeking to enforce child support payments.