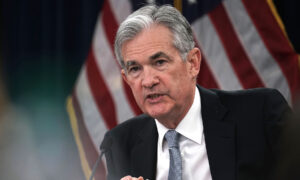 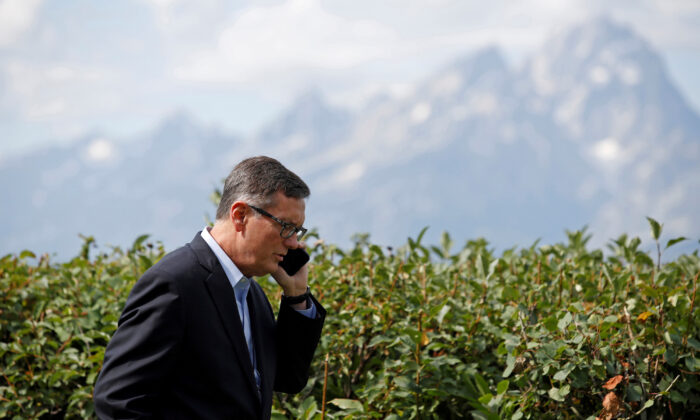 Federal Reserve Vice Chair Richard Clarida talks on the phone during a conference in Jackson Hole, Wyoming, on Aug. 23, 2019. (Jonathan Crosby/Reuters)
US News

'The disruption [in China] could spill over to the rest of the global economy,' he acknowledged
By Tom Ozimek
FONT BFONT SText size
Print

Federal Reserve Vice Chair Richard Clarida said on Tuesday that the central bank is “closely monitoring” the impact of the coronavirus epidemic on the U.S. economy but that it is too soon to say if it will lead to a “material change” in the economic outlook, the Fed’s oft-repeated criterion for a potential interest rate cut.

“We are closely monitoring the emergence of the coronavirus…” Clarida said in prepared remarks at the National Association for Business Economics conference in Washington. “But it is still too soon to even speculate about either the size or the persistence of these effects, or whether they will lead to a material change in the outlook.”

Clarida acknowledged that the spread of the deadly virus held downside risks.

“The disruption [in China] could spill over to the rest of the global economy,” Clarida said, but added that he believed the U.S. economy was well-poised to withstand the impact of the outbreak.

“In its 11th year of a record expansion, the U.S. economy is in a good place,” the Fed’s no. 2 said. “The labor market remains strong, economic activity is increasing at a moderate pace, and the Federal Open Market Committee’s (FOMC) baseline outlook is for a continuation of this performance in 2020.”

Other Fed officials have warned of the risk of economic spillover, but similarly said it was too early to determine the extent of the impact.

“The coronavirus is exacting a heavy human toll. It is also clouding the near-term economic outlook for China, with potential spillovers to the rest of the world,” Cleveland Fed President Loretta Mester said in a speech in Washington on Monday.

“At this point, it is difficult to assess the magnitude of the economic effects, but this new source of uncertainty is something I will be carefully monitoring. I’ve incorporated it as a downside risk to my modal forecast, which calls for growth to continue at trend, slightly slower than the pace of last year, with continued healthy consumption growth and some pickup in investment spending.”

The Fed held rates steady at its first meeting of the year in late January and has said it would not make cuts unless there was a material change to the economic outlook.

But stock markets around the world have been spooked by the spread of the virus to some 30 countries outside of China, with market volatility spiking to levels not seen since December 2018, when the Fed was moved to shift its hawkish stance on rates and begin easing.

In a sign of ongoing market turbulence, the VIX volatility index, also known as Wall Street’s “fear gauge,” spiked to 30.2 on Tuesday, with the ceiling of 30 widely seen as the threshold demarcating major market uncertainty and investor anxiety.

On Monday, when Wall Street was in the grip of a massive rout, the VIX shot up to 26.2.

“There is no question financial markets are coming round to the realisation that this particular crisis is likely to have a slightly longer shelf life than many thought was the case a couple of weeks ago,” said Michael Hewson, chief markets analyst at CMC Markets in London, according to Reuters.

“For now, there appears little prospect that financial markets look likely to settle down in the short term, which means investors will have to get used to an extended period of uncertainty and volatility,” Hewson added.

While the Fed has so far held fast to its wait-and-see stance on rates, markets have been increasing their bets that the Fed will soon cut in the face of the coronavirus fallout.

“Our base case is for two cuts this year, with a higher probability of three cuts than one cut,” said Allen Sukholitsky, chief macro strategist at Xallarap Advisory, in an emailed statement to The Epoch Times.