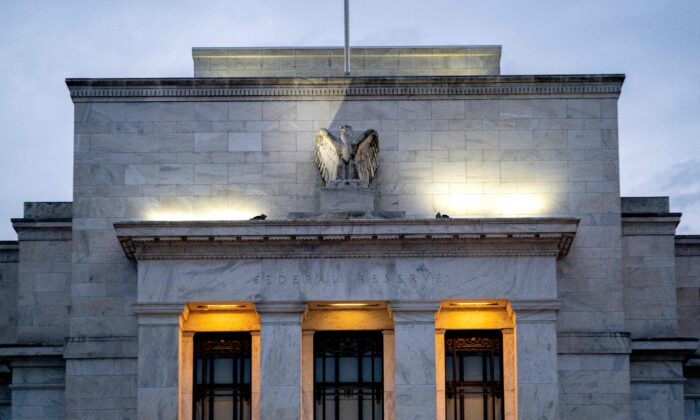 Federal Reserve officials are weighing in after U.S. annual inflation surged to 8.5 percent in March.

Lael Brainard, a governor at the Federal Reserve, said the central bank is prepared to move “expeditiously” to raise interest rates to bring the benchmark to a neutral level. The objective is to lower inflation to the institution’s 2 percent target range, she said in an interview at a Wall Street Journal jobs summit following the release of the latest consumer price index (CPI).

“We are doing that by tightening monetary policy methodically, and it is through a series of interest rate increases as well as beginning that balance sheet runoff,” Brainard said.

She noted that a decision on the more than $9 trillion balance sheet could be finalized as early as next month’s Federal Open Market Committee (FOMC) policy meeting, with a reduction possibly occurring in June.

“In terms of exactly what the right pace of that set of increases in the policy rate from meeting to meeting, I don’t really want to focus on that,” Brainard said. “But I would just say the combined effect will bring the policy stance to a more neutral posture expeditiously later this year.”

The soon-to-be No. 2 person at the institution noted that she was pleased to see the annualized core inflation rate, which eliminates the volatile food and energy sectors, clocking in at 6.5 percent.

In an April 12 research note, James Knightley, chief international economist at ING, wasn’t as ebullient over this dip in the core rate.

“It is important to note that the core miss was due to just two components showing weakness. Used car and truck prices, which have a large 4.2% weighting within CPI, fell 3.8,” he wrote.

James Bullard, president of the St. Louis Fed Bank, thinks it might be a “fantasy” to fight inflation with tepid rate hikes, telling Financial Times that the rate-setting committee needs to be more aggressive.

Bullard has been the most hawkish central bank official, saying that the Fed is behind the curve on inflation-busting. He recently explained that he wants to see a policy rate of 3.5 percent by the end of 2022.

In prepared remarks at the Money Marketeers in New York on April 12, Richmond Fed President Thomas Barkin suggested that the central bank raise rates to a level where borrowing costs stop stimulating the economy, noting that they should be increased if inflation remained elevated for longer.

“How far we will need to raise rates, in fact, won’t be clear until we get closer to our destination, but rest assured we will do what we must to address this recent bout of above-target inflation,” Barkin said. “The best short-term path for us is to move rapidly to the neutral range and then test whether pandemic-era inflation pressures are easing and how persistent inflation has become. If necessary, we can move further.”

But the Federal Reserve still needs to be careful, according to Fed Bank of Philadelphia President Patrick Harker.

Speaking at The Hill’s “Future of Jobs” Summit, Harker said the central bank needs to tread carefully when combating inflation.

Because “the economy is strong” and “we’re seeing lots of good signs,” Harker recommended striking a fine balance between tightening and supporting growth.

“What we don’t want to do is ruin the good things by being too aggressive in terms of inflation. We need to take action, but need to be careful at the same time,” he said.

Is the Fed Behind the Eight Ball?

The Federal Reserve is attempting to get a stranglehold on inflation by raising interest rates.

It’s widely anticipated that the central bank will pull the trigger on two half-percentage-point rate hikes at the May and June FOMC policy meetings, according to the CME FedWatch Tool.

But is this level of tightening enough in this economy?

“If inflation doesn’t calm down, the Fed’s plan for a gradual withdrawal of economic support through interest rate hikes may result in further Fed tightening,” Mark Gardner, president of Retire Well Dallas, a wealth management company, told The Epoch Times.

Financial markets have responded to the Fed’s tightening, and Treasury yields are falling. This might be showing that the Fed hasn’t lost control of inflation, according to Scott Sheridan, CEO of tastyworks, an online brokerage services firm.

“If the war in Ukraine ends and supply chain logjams can be corrected, I think there’s a realistic chance some of these inflation pressure points will subside,” Sheridan told The Epoch Times. “Because of that, I’m not sure much higher interest rates are necessary.”

While the Fed hasn’t yet lost control over inflation, the next committee meetings will be critical for the institution, according to Tom Siomades, chief investment officer at AE Wealth Management.

“The next few meetings will be key. They need to move at least 150 bps combined,” Siomades told The Epoch Times. “So right now, they are behind the eight ball.”

When it comes to grappling with soaring multi-decade-high prices, the assertion that the Fed can control inflation and return to its benchmark 2 percent target is “a dramatic overreach,” according to Robert Johnson, a professor at the Heider College of Business at Creighton University and CEO of Economic Index Associates.

“I am confident that the Fed’s recent policy shift to a more restrictive monetary policy signals that the Fed signals a change in its first priority from promoting full employment to a focus on maintaining price stability (fighting inflation),” Johnson told The Epoch Times. “There are many exogenous factors that are outside of the control of the Federal Reserve—such as the geopolitical conflict in Ukraine—that, in addition to Federal Reserve monetary policy, will dictate the future path of inflation.”

That said, inflation could still persist, even after the Fed’s tightening cycle begins, Sankar Sharma, a market analyst, told The Epoch Times.

If the Fed is ultra hawkish moving forward, this could trigger a recession, according to Sharma.

“The Fed has a tough task because of the geopolitical situation and the dynamic nature of the events,” he said. “The good news is that it is unlikely we see the recession in the U.S. this year. But food inflation and inflation, in general, will persist, sadly.”

Minutes from last month’s policy meeting highlighted that officials want to be more aggressive to trim inflation pressures. The financial markets have also been acclimating to a new rising-rate environment.

However, BlackRock, the world’s largest asset manager, doesn’t think the Federal Reserve will be raising rates as much as investors are predicting.

BlackRock Head of APAC iShares Investment Strategy Thomas Taw thinks the central bank will be aggressive at first, but then will refrain from being too aggressive toward the end of the year.

“We might see some aggressive action over the next few months but I think once inflation eventually starts to curtail then the Fed will pull back a little bit in terms of how aggressive they’re moving into the future,” Taw told Bloomberg earlier this week.