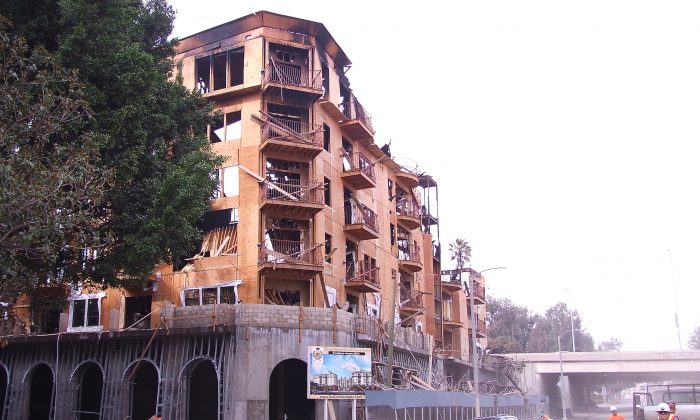 The 1.3 million square-foot apartment complex was under construction when it burned to the ground early Monday morning, shooting flames 50 feet in the air and severely damaging two neighboring high-rise buildings.

About 25 agents and specialists from the federal bureau of Alcohol, Tobacco, and Firearms (ATF) met with LAFD personnel, LAFD arson investigators, and local ATF agents already involved in the case.

LAFD Chief Ralph Terrazas said one cause for suspicion was the fast-burning nature of the fire.

“I talked to the crew that was on duty yesterday morning who went to the fire, and upon leaving their quarters, which is literally across the street, this structure was heavily involved in fire. That’s unusual to have that much fire all at the same time,” he said.

However, he added that investigators are not rushing to any conclusions.

“We are not treating this as a criminal investigation, but so far we have not ruled anything out,” he said.

The investigation will include two parts, examining the scene of the fire and interviewing witnesses.

The team will be using dogs to sniff for fire-accelerating substances that are often used in setting a fire. They have already begun obtaining surveillance videos from nearby buildings.

Carlos Canino, the special agent in charge of the Los Angeles Field Division of the ATF, said in some parts of the building, they may have to remove as many as seven floors to get to the bottom of the apartment complex, which was one block long.

“If this was handled by local resources, we’d be bogged down at this fire scene for nine months. It’s just too big,” he said.

Monday’s fire quickly consumed a large amount of exposed wood in the seven-story structure, which covers an entire city block near the interchange of the 110 and 101 freeways.

The fire prompted hours of freeway closures, melted freeway signs, and broke windows in nearby buildings. A neighboring 16-story city-owned building sustained extensive fire and water damage and could be closed for six months.

No one was injured, but the economic cost is expected to be high. The apartment building, called Da Vinci apartments, was valued at $10 million.

The fire at the apartment complex was reported at 1:20am on Monday. More than 250 firefighters were deployed to fight the fire.

Authorities urged anyone with information about the possible cause of the fire to call the LAFD Arson Department at (213) 893-9850.