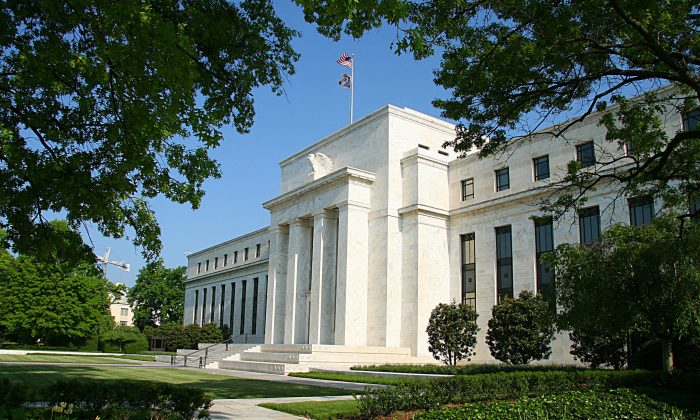 NEW YORK—Before 1994, the Federal Reserve (Fed) did not even announce interest rate decisions. The markets were left to guess what would happen after each meeting.

By 2016, the Fed communicates so much, markets sometimes don’t know what they should make of the different utterances of different Fed officials.

Today, it was the turn of the president of the San Francisco Fed, John Williams. Of course, the focus was to get any clues about a possible rate hike in June, after its first hike to 0.25 percent in December of 2015 and three meetings without further raises in January, March, and April this year.

But his speech at the Council on Foreign Relations contained much more than just that.

I don’t know what will happen in June, it depends on the data
— John Williams, San Francisco Fed

Right off the bat, Williams said the Fed will probably raise rates in June, but also cautioned it would depend on the economic data, including external risks such as China or Britain exiting the European Union. So there may be no hike after all in June.

“I don’t know what will happen in June, it depends on the data,” he said. However, the general tenor of his speech was that if things stayed as they were with the economy relatively steady, there would be a June rate hike.

“The view there was no chance we would do anything in June was inconsistent with my view of the situation,” he said of the market not pricing in a rate hike until very recently. “Markets thought June rate hike expectations were zero.”

Best-selling author James Rickards told Epoch Times in March: “I think in June, particularly after having skipped March, they’re going to want to get back on track. They’re going to raise rates, but the market expectation is still not better than 50 percent that they will.”

On our full employment mandate, we are basically there. On our inflation mandate, we have made good progress and I’m optimistic to get to our goal in the next year or two.
— John Williams, San Francisco Fed

If there is no collapse in economic data and China and the United Kingdom remain relatively stable, it would be hard to achieve a goal of “three to four hikes this year” without raising in June.

Especially because Williams said there probably won’t be back to back rate hikes this year.

“Back to back [rate hikes] I see as less likely because we are on the strategy of gradual rate increases. It’s not going to mean raising rates during each successive meeting.”

Overall, his assessment of the economy was positive because of low unemployment as well as gradually increasing inflation.

“On our full employment mandate, we are basically there. On our inflation mandate, we have made good progress and I’m optimistic to get to our goal in the next year or two.”

On top of the dual mandate of inflation and employment, Citigroup chief economist Willem Buiter pointed out that the Federal Reserve System was mainly created for financial stability reasons in 1913 and asked whether it would be prudent to raise rates just to avoid speculative bubbles.

“Given that we are close to our dual mandate goals … I do take seriously the notion that very low-interest rates for a very long period of time do create … a lot of reach for yield and can [make] investors, households, and businesses taking on risks that don’t make sense, in the long run, they only make sense in the environment of very low interests,” said Williams.

And although Williams agrees in principle with Mr. Buiter, he doesn’t see any acute problems that would necessitate a rate hike right at this moment.

What if the economy goes south and the United States enters another recession? Williams says the Fed should stick to tried and true means of stimulating the economy like Quantitative Easing (QE) and skip new unconventional techniques like negative interest rates and helicopter money.

“The US financial system is a capital market system. QE is a powerful tool because it works on longer-term interest rates,” Williams said.

Negative interest rates, however, could have a negative effect on sentiment: “It is less effective in terms of financial markets and arrangements aren’t set up for negative rates. It creates technical issues. It creates negative confidence, people have not experienced that before. ‘This is negative, it must be bad.’

Helicopter money, on the other hand, is nothing else than fiscal stimulus and it doesn’t matter whether it’s financed by the central bank a no cost or at zero interest rates through government bonds, as it is currently the case in Japan.

“Whether it’s funded by the government or the central bank by an expansion of the money supply, both are zero cost ways of funding the government. If interest rates are zero, it doesn’t matter,” he says.

And in spite of markets and politicians scrutinizing the Fed, Williams doesn’t think going back to the good pre-1994 days is a good idea. “Before people didn’t know who we were and what we did and we didn’t get much attention. [Now] we should be as transparent as possible,” he says.

Also, there is no need to audit Federal Open Market Committee (FOMC) decisions on monetary policy: We “focus on the economy and don’t get caught up in politics. It’s the wonkiest, geekiest, most economist-like thing you can imagine.”