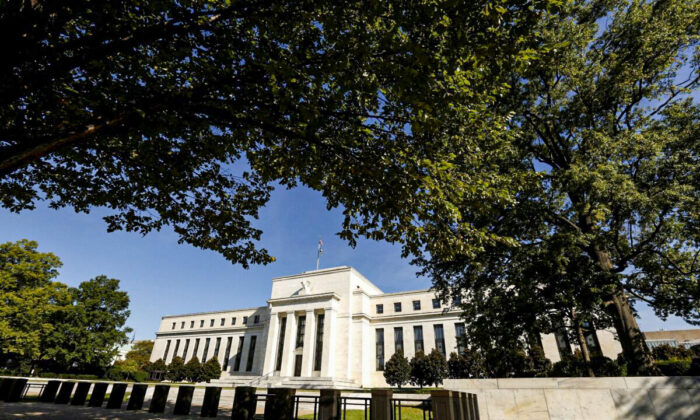 Minutes released on April 6 show that committee members “generally agreed” on a cap of $60 billion in Treasury securities and $35 billion in mortgage-backed securities that would be cut from the balance sheet. The central bank plans to phase that in over three months.

Fed officials said trimming the balance sheet would emphasize the institution’s firm stance on monetary policy, noting that it would be appropriate to initiate this campaign at a future meeting, possibly as early as the May meeting.

Many participants noted that they would have preferred a 50-basis-point rate increase in the target range for the benchmark fed funds rate. They also said they would like to see at least one half-point increase at future meetings, particularly if inflation pressures remain high or intensify.

Others also alluded to the broad array of risks to the economic outlook, including Russia’s invasion of Ukraine, surging energy costs, and global tightening efforts by central banks.

Overall, the minutes spotlighted the uncertainty surrounding sky-high inflation and the myriad of risks associated with this current environment.

Financial markets added to their losses following the release of the minutes, with the Dow Jones Industrial Average closing 0.42 percent lower, while the S&P 500 lost 0.97 percent; the Nasdaq Composite Index fell 2.22 percent to close below 14,000.

The Treasury market was mostly in positive territory, with the benchmark 10-year yield up by 0.059 percent to 2.613 percent. The U.S. Dollar Index (DXY), which gauges the greenback against a basket of currencies, was up by 0.1 percent at 99.57.

Fed Gov. Lael Brainard wrote in a speech for a Minneapolis Fed Bank discussion that the central bank needs to engage in more aggressive and faster tightening to drive down inflation.

As part of these policy efforts, Brainard suggested a quicker reduction in the more than $9 trillion balance sheet and additional rate boosts. This could indicate that the institution could move on increases greater than 25 basis points.

“Currently, inflation is much too high and is subject to upside risks. The Committee is prepared to take stronger action if indicators of inflation and inflation expectations indicate that such action is warranted,” Brainard said. “The [FOMC] will continue tightening monetary policy methodically through a series of interest rate increases and by starting to reduce the balance sheet at a rapid pace as soon as our May meeting.”

Brainard noted that she anticipates that the balance sheet will shrink more rapidly compared to previous economic recoveries.

Harker mirrored Brainard’s remarks, telling the Delaware State Chamber of Commerce that he expects “a series of deliberate, methodical hikes as the year continues and the data evolve.”

“The bottom line is that generous fiscal policies, supply chain disruptions, and accommodative monetary policy have pushed inflation far higher than I—and my colleagues on the FOMC—are comfortable with,” he said. “I’m also worried that inflation expectations could become unmoored.”

Mary Daly, president of the San Francisco Fed Bank, was blunt when she asserted that “inflation is as harmful as not having a job.”

Daly refrained from speculating how quickly the institution could respond to rampant price inflation. She noted that she thinks they’ll lead to widespread effects, such as making it more challenging to “finance a car or a business.”

“I understand that inflation is as harmful as not having a job, that if you have a job and you can’t pay your bills or I feel like I can’t save for what I need to do, then that’s keeping you up at night,” she told a presentation hosted by the Native American Finance Officers Association.

“And our goal is to make sure that people don’t stay up worrying about whether their dollar today will be the same and worth a dollar tomorrow.”

RBC Wealth Management is projecting 50-basis-point increases in May and June, followed by a quarter-point boost at each meeting in the second half of 2022.

“While we agree with the FOMC’s near-term inflation outlook—our forecast assumes headline and core CPI will only slow to 4.5% by the [end of] 2022—we think headline inflation will slow toward 2% next year as supply chain bottlenecks improve and past increases in commodity prices fall out of year-over-year CPI calculations,” Josh Nye, a senior economist at RBC, wrote in a note.

According to the CME FedWatch Tool, most of the market is penciling in a half-point rate hike at next month’s two-day policy meeting.

Recession talk on Wall Street has intensified in recent weeks as monetary policy tightening and the yield curve inversions have amplified expectations of a slowdown in growth.

This week, Deutsche Bank stated that rising interest rates could initiate a “mild recession” late next year, resulting in the unemployment rate hitting 5 percent in 2024.

“We no longer see the Fed achieving a soft landing. Instead, we anticipate that a more aggressive tightening of monetary policy will push the economy into a recession,” bank economists wrote in the report.

“It is now clear that price stability is likely to only be achieved through a restrictive monetary policy stance that meaningfully dents demand.”

In an April 6 note, Merk Research stated that the odds of an economic downturn over the next 12 months are roughly 33 percent, matching Goldman Sachs’s recent estimate.

But this doesn’t mean a “soft landing” is out of reach for the Fed.

“The labor market is showing no signs of slowdown—so far,” Nick Reece, a portfolio manager at Merk, wrote in a note. “The most positive development would be a bigger increase in the labor force participation rate. In other words, an accelerated return of the supply-side would be both pro-growth and disinflationary, and would help the Fed achieve a ‘soft landing.'”

The latest Atlanta Fed Bank GDPNow model shows that the U.S. economy expanded by 0.9 percent in the first quarter, down from the previous estimate of 1.5 percent.

All eyes will be on next week’s critical March consumer price index (CPI) report. Economists are penciling in an annual inflation rate of 8.3 percent.