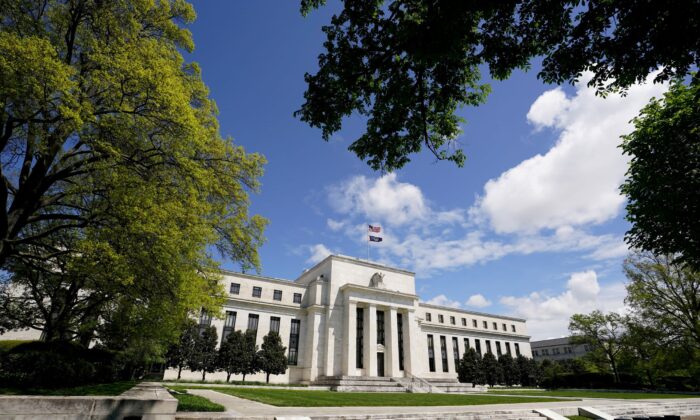 The Federal Reserve Board building on Constitution Avenue in Washington on May 1, 2020. (Kevin Lamarque/Reuters)
Business Columnists

Recent policy changes will do little to erase inflation fears

Federal Reserve policymakers have made a change. Chairman Jerome Powell announced only days ago that the nation’s inflation problems impel a more restrictive monetary stance.

These changes were widely expected, as was the Fed’s warning of more rate hikes to come and a kind of reverse quantitative easing in which policy absorbs inflationary liquidity from the system by selling from the huge asset portfolio that the Fed amassed during the long period of quantitative easing.

All this is a relief for the inflationary concerns of Wall Street and Main Street. But still more helpful was something that few expected. The Fed’s public statement accompanying the policy shift described today’s inflation as the result of “broader price pressures” and not the war in Ukraine.

For obvious political reasons, President Joe Biden has blamed rising energy prices and, by implication, overall inflation on Russian President Vladimir Putin. Had the Fed gone along with that kind of reasoning, it would have left all fearing that monetary policymakers lacked the conviction needed to deal with inflationary pressures.

Given that Powell had for some time last year dismissed inflationary pressure as “transitory,” this new, more serious attitude should give people greater confidence that the Fed will diligently work to ease general price pressures.

Still, the Fed’s steps must seem inadequate for those who remember the great inflation of the 1970s and 1980s or have studied that time. These people are aware how a lack of forceful counter-inflationary moves then allowed inflation to embed itself into the economy and ultimately made relief much more difficult.

Since inflation has raged for more than a year and now stands at an 8 percent annual rate, the worst in 40 years, many see recent Fed actions as altogether too cautious, doing too little too late. That certainly was the judgment of Federal Reserve Bank of St. Louis President James Bullard. He dissented from the Fed’s decision, pressing for a larger 0.5 percentage point increase in the federal funds rate.

No doubt monetary policymakers opted against an aggressive shift for fear that it would cause markets to crash and perhaps bring on a recession. Although that isn’t an unreasonable concern, it would be easy to overstate.

Markets certainly show no sign of crashing in the face of the Fed’s moves. At least initially, they seem to have responded with relief that the Fed was, at last, taking the inflationary threat seriously.

Nor does the risk of recession otherwise look serious. To be sure, the post-pandemic economic surge is slowing, but little points to outright recession or even the kinds of vulnerabilities that might give the Fed pause.

Besides, for all the drama of the Fed’s policy shift, what it’s doing is far from restrictive. Consider that 8 percent inflation enables someone to repay borrowed funds with dollars that are worth 8 percent less in real terms than the year before. If people borrow short-term at the federal funds rate of 0.5 percent, they enjoy using the money for a year and effectively pay the lender far less value than they earn from the interest charged.

Indeed, matters are such that the borrower is effectively paid in real terms to use the money, about 7.5 percent per year, in fact. In other words, a major incentive to borrow and spend remains—hardly a restrictive monetary environment.

Of course, these first moves are far from the end of the story. The Fed has pledged to be responsive to signs emerging from the economy. Making the judgment that the Fed so far has done too little hardly condemns the U.S. economy to suffer ongoing inflation on par with what befell it in the 1970s and early 1980s.

Rather, a recognition that the Fed hasn’t done enough makes clear that before too long, policymakers will have to accelerate interest rate increases and reverse the effects of past quantitative easing more dramatically than suggested by recent Fed statements. Circumstances likely will demand it.