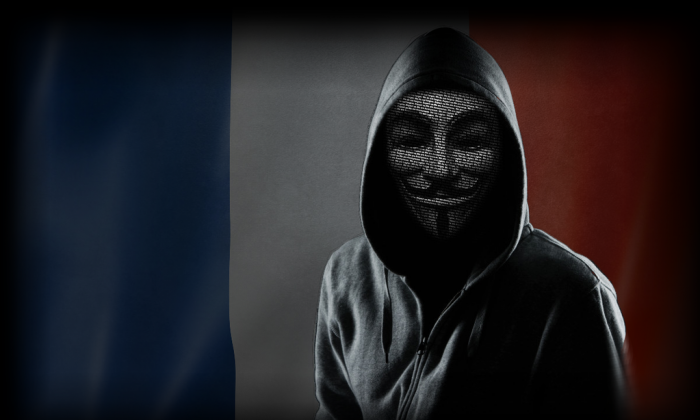 A hooded figure wears a Guy Fawkes mask in an image used by TorReaper, a member of the GhostSec anti-terrorism hacker group. GhostSec and the hacker collective Anonymous are fighting the online presence of ISIS. (GhostSec)
Cybersecurity

The FBI on Saturday confirmed it is aware of claims made by hacker collective Anonymous that there’s a terror threat in Atlanta, but it said it doesn’t consider it to be credible.

Anonymous said that it found threats by the Islamic State, or ISIS, against the WWE Survivor Series, which is scheduled for Sunday night in Atlanta, according to a report from the International Business Times.

However, a major Twitter account associated with Anonymous stated. “We did not spread any rumors about possible future ISIS attacks, and frankly, we do not know where the rumors come from.”

We did not spread any rumors about possible future ISIS attacks, and frankly, we do not know where the rumors come from.

“The FBI is aware of reports of an alleged threat that includes an Atlanta, Georgia, venue and event,” J. Britt Johnson, who is special agent in charge of the FBI’s Atlanta office, said in a statement, reported CBS News.

He said while the agency takes “all threats seriously, we do not have specific or credible information of an attack at this time. We have, however, made the proper notifications as we continue to work closely with our law enforcement and private sector partners to keep our community safe.”

The WWE said Saturday that the Atlanta venue holding the event will see increased security to ensure the safety of fans. The doors of the event will open early at 6 p.m. to avoid delays due to security.

The International Business Times, which first reported on the Anonymous announcement, also got a statement from the shadowy group. Anonymous said the threat against the WWE hasn’t been “100% confirmed.”

The hackers also said they published a list of events in France, the United States, Indonesia, Italy and Lebanon that might also be targeted. The group used the hashtags #22Daesh and #OpParis.

The Anonymous statement read: “This is a warning to anyone going to any of the events listed below or going to any event with a lot of people, church services included – but the risk of any churches outside Paris/France being targeted is low.”

“There will be big events worldwide on the 22nd, go at your own risk.”

However, as Nov. 22 has drawn to a close in many of these locations, it appears the threat was unsubstantiated or they were intercepted by law enforcement.

After the Paris terrorist attacks last week that left 130 people dead, Anonymous announced it is now at war against ISIS. In the meantime, the hacker group took down more than 20,000 ISIS-related Twitter accounts.