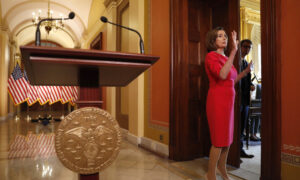 FBI Looking for More People Who Entered the Capitol Unlawfully

The FBI is looking for more who engaged in violence that were among the protestors inside or around the Capitol building in Washington, D.C. on Jan. 6.

“The Federal Bureau of Investigation’s (FBI) Washington Field Office is seeking the public’s assistance in identifying individuals who made unlawful entry into the United States Capitol Building and assaulted federal law enforcement personnel on January 6, 2021, in Washington, D.C.”

The #FBI is seeking information to help identify individuals who unlawfully entered the U.S. Capitol on January 6 and assaulted federal law enforcement personnel. If you recognize someone, submit a tip at https://t.co/buMd8vYXzH. @FBIWFO https://t.co/Fn002FxqZd pic.twitter.com/MtWgQvdAS5

Michael Sherwin, acting U.S. attorney for the District of Columbia, in response to questions about group affiliations of protestors that participated in the storming of the Capitol, answered: “It looks like there may have been a loose affiliation, but it didn’t look like there was any specific ‘militia groups’ that planned or were affiliated with the persons that we specifically charged.”

In response to questions about Capitol Police opening the barricades and letting protestors in, Sherwin said that the federal prosecutors are “looking at all actors” involved.

Sherwin, acting U.S. attorney for the District of Columbia, said that his office has started a federal, excessive force investigation over the shooting and killing of former U.S. Air Force veteran Ashli Babbitt in the Capitol on Jan. 6.

Babbitt entered the Capitol building with a group of protesters and was shot at point-blank range in the neck as she was climbing a door with a broken window inside the Capitol, she tragically succumbed to the wounds.