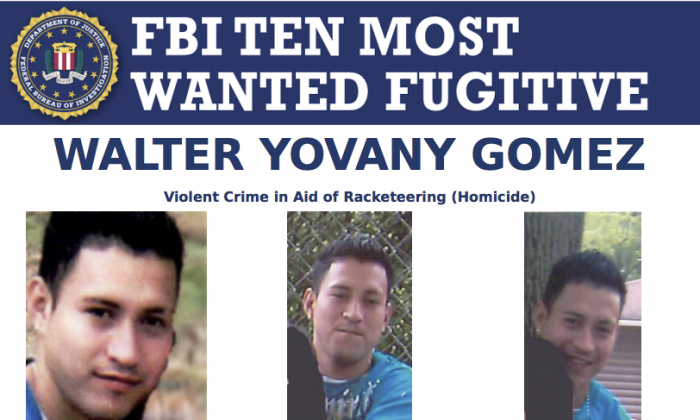 Walter Gomez is wanted by the FBI in connection with a brutal 2011 murder in Plainfield, N.J. (FBI/screenshot)
Crime and Incidents

The FBI added fugitive Walter Yovany Gomez to its Ten Most Wanted list in connection with the 2011 murder of his friend for associating with a rival gang in Plainfield, N.J.

Gomez was attempting to become a fully-fledged member of the MS-13 gang by carrying out the gang-ordered killing, according to the FBI.

“To become a full-fledged member of MS-13 you have to kill someone on behalf of your local clique, or crew,” said Special Agent Dan Brunner in a statement on April 12. “Only then can you get the MS-13 letters tattooed on your body.”

Brunner is investigating the case from the FBI’s Newark, N.J., division.

On May 8, 2011, Gomez—known to his friends as Cholo—invited himself and a co-conspirator to the victim’s house for an all-night party, according to the FBI.

Early the next morning, as the victim, Julio Matute, was getting dressed to go to work, Gomez allegedly struck Matute in the back of his head several times with a baseball bat. Gomez then allegedly cut his throat with a knife and repeatedly stabbed him in the back with a screwdriver, the FBI said.

“He was stabbed so many times that when his body was discovered a week later, police officers thought that he had been shot with a shotgun,” Brunner said.

Gomez is a Honduran citizen who came to the United States illegally. He was last seen in Maryland, and the FBI believes he may still be there, in northern Virginia, or back in New Jersey.

A reward of up to $100,000 is being offered for information leading to Gomez’s capture.

Anyone with information can contact the nearest FBI office, local law enforcement agency, or submit a tip online.