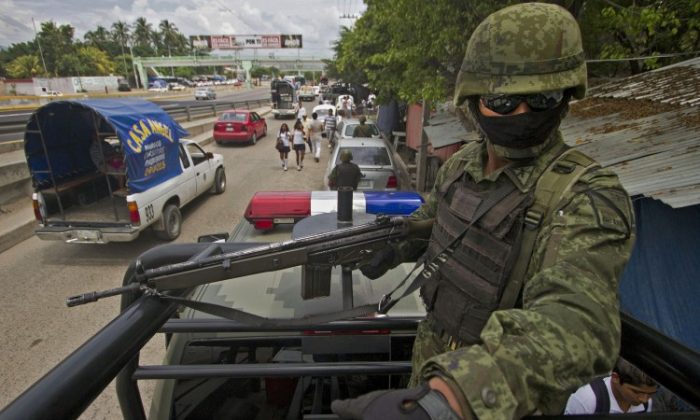 A soldier of the Mexican Army patrols outside a school during a security operation in Acapulco, Mexico, on Sept. 26, 2012. (Pedro Pardo/AFP/Getty Images)
Americas

Two weapons that derived from the controversial federal Operation Fast and Furious gun-tracking program were discovered at the murder crime scene of a Mexican beauty queen last month, it was reported Wednesday.

The weapon in question was a Romanian AK-47-type WASR-10 rifle and was found at the crime scene where a Mexican beauty queen, Maria Susana Flores Gamez, and four others were shot dead in the city of Guamúchil, Sinaloa state, in November, reported CBS News.

The Los Angeles Times reported Wednesday that another weapon at the same crime scene—a 5.7 mm pistol—also came from the botched Fast and Furious, an operation under the Bureau of Alcohol, Tobacco, Firearms and Explosives (ATF). In the program, some 2,000 weapons were lost and allowed to flow across the Mexican border and likely into the hands of violent cartel members.

The crime scene is apparently where suspected Sinaloa drug cartel operatives engaged in a shootout with members of the Mexican military.

Sen. Chuck Grassley (R-Iowa) told CBS that the U.S. Department of Justice (DOJ) did not tell Congress of the latest Fast and Furious gun recovery during the November Sinaloa shootout. Grassley has previously requested that the DOJ inform Congress of any weapons that are found in connection with the gunrunning operation.

CBS traced records showing that Uriel Patino, a suspect who allegedly bought more than 700 Fast and Furious guns, owned the AK-47-type WASR-10 at one time. The 5.7 mm pistol, identified as an FN Herstal manufacture, was purchased by ATF supervisory agent George Gillett Jr. in January 2010, according to the Times.

Gillett declined to give information to the newspaper why he purchased the weapon or how it ended up at the crime scene in Sinaloa.

“I’ve got no comment. I can’t discuss it,” he told the Times. “But it was a lawful transaction.”

In December 2010, two Fast and Furious AK-47s were discovered at the murder scene of U.S. Border Patrol Agent Brian Terry—who has been cited as one of the main casualties in the bungled gunrunning scandal.

The program was intended to stop the flow of firearms into Mexico by tracking where they ended up. However, several thousand weapons were subsequently lost.

The scandal ultimately ensnared Attorney General Eric Holder, who testified in front of Congress but was found by a DOJ internal investigation to be uninformed about the Fast and Furious program.