Fashion Designer Says Shen Yun’s Colors ‘Will Give You Life’ 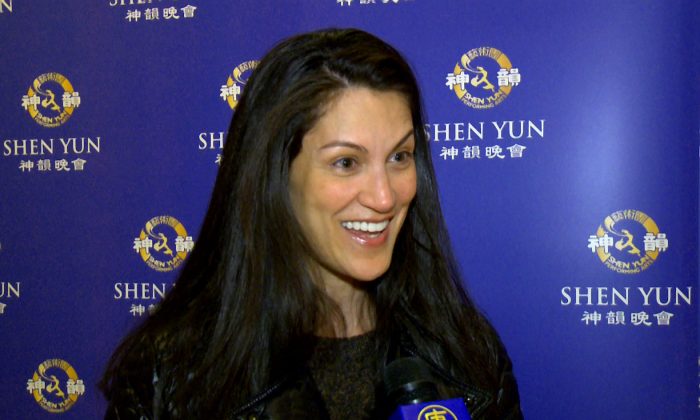 “I love the color combination,” she said. “It’s great to see how the color went to the stage today.”

The New York-based company brings 5,000 years of Chinese culture alive, including brilliantly-colored costume designs. Its vividly animated backdrop also brings the audience through colorful scenes, from the divine imagery of a sacred temple hall to the ancient Chinese garden.

Ms. Yepez made the move from model to designer in 2013. Her handbags now grace the arms of celebrities, as well as the pages of fashion magazines, including Vogue. She is preparing designs for the next Mercedes Benz New York Fashion Week, and she said “Maybe I should change some of the color palette after seeing the show.”

“These colors will give you life,” she said. The blues, greens, and oranges, all inspired her.

Her 7-year-old daughter who attended the performance with her also loved the beauty of the dances and the stories told on stage. Ms. Yepez recalled her daughter’s words: “Mom, this is beautiful. I like the dancing, I like how they move.”

Shen Yun features the world’s best classical Chinese dancers. Through dance, the company’s website states “Shen Yun weaves a wondrous tapestry of heavenly realms, ancient legends, and modern heroic tales.” Ms. Yepez said the stories were fascinating for her as an adult, while also being simple enough for her daughter to understand and enjoy.

“It’s all about culture, and everything has a meaning,” Ms. Yepez said. Even the intricate gestures in classical Chinese dance contain meaning, according to the Shen Yun website.

The website explains: “In classical Chinese dance, it is meaning that drives the body into motion.”

Shen Yun also performs ethnic dances from China’s more than 50 ethnic groups. The website states: “The way a person from a particular ethnic group moves contains that group’s own distinct qualities, so Chinese people’s movements naturally have a Chinese feel.”

Ms. Yepez said she is trying to teach her daughter to appreciate such meaning. She said: “All the ancient stories about China, it’s great!”