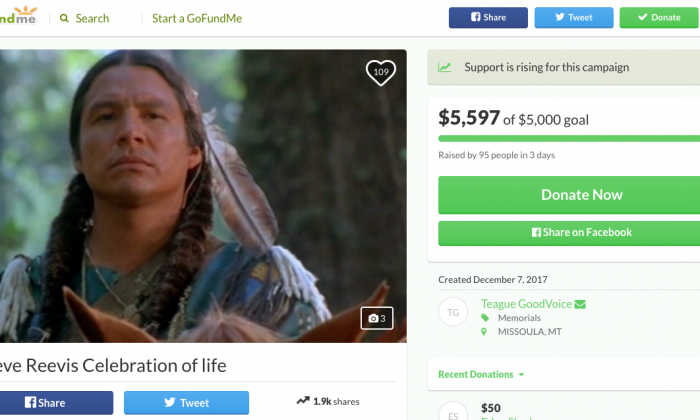 Actor Steve Reevis, known for roles in “Fargo” and “Last of the Dogmen,” died at the age of 55, according to reports.

Reevis died at a hospital in Missoula, Montana, on Thursday. The cause of his death was not immediately clear, The New York Post reported.

We learned of the passing of one of our Haskell alumni, Mr. Steve Reevis. Reevis attended Haskell when it was a junior college and received a degree in art. He is most well known for his acting career in major films like Geronimo, Last of the Dogmen, Fargo and many more. RIP pic.twitter.com/wQMPvfFs8p

Reevis was a member of Montana’s Blackfeet Tribe. He appeared in “The Longest Yard,” “Geronimo,” and “Dances With Wolves.” And he also appeared in TV shows like “Jag” and “Walker, Texas Ranger.” In “Fargo,” he played the role of Shep Proudfoot.

We lost a tremendous talent and friend today as Steve Reevis crosses over. Blessings to all relations. pic.twitter.com/Evjmy1Pvfl

I met #SteveReevis and his family when I lived in ATL. Genuine, kind, loving. Praying for his family tonight. RIP. pic.twitter.com/Vxb5K5V0E4

He leaves behind a wife and four kids.

Other details about his passing are not clear

In loving memories we will continue to see you on the screen. Watched you in #Geronimo last night. God bless your soul. A wonderful and talented Native American Actor. A brilliant Actor. My deepest condolences to his family at this time ❤️????https://t.co/016q1an6AC

“I was blessed to have shared the screen with Steve Reevis,” said Tinsel Korey, a Native American actor, according to Indian Country Media Network. “His comedic timing was impeccable, his smile contagious and his spirit uplifted a room. Both on and off screen he had a way of making you feel at home. The cast and crew of our movie are absolutely heartbroken. My deepest condolences to his family in this time of great sorrow. He will be missed dearly,”

After his death, A GoFundMe page was created to help his family deal with funeral expenses.