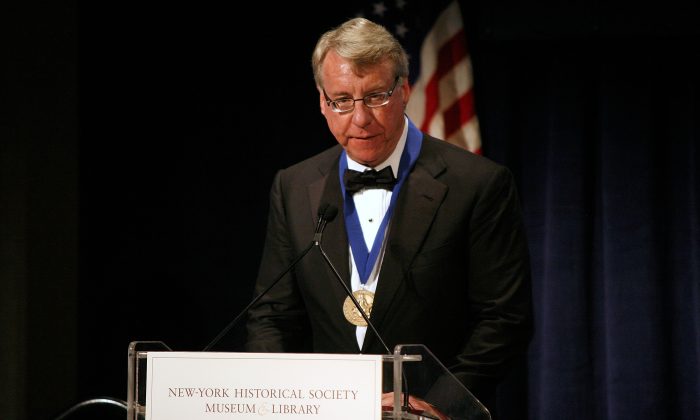 James Chanos, founder of Kynikos Associates LP, first noticed China’s real estate bubble in 2009. He has then correctly anticipated the slow-down in the Chinese economy, which started in 2010. Now he has more bad news for people banking on reforms to save the day.

“The trend is unmistakable. It’s down. Surprises are going to be on the downside,” he said at a panel discussion at The China Institute in New York on Sept. 22.

He convincingly dispelled notions the economy is transitioning from an investment led growth model to a consumer-driven one.

They’ll have to go through their credit event.
— James Chanos, Kynikos Associates

“China is reforming and they are going to transition … to a consumer economy. I’ve been hearing that for five years.” he said, pointing out the investment component of GDP has only fallen by 2 percentage points since 2010. “Just saying it will happen doesn’t mean it will happen.”

Chanos is also cautious on China’s ability to escape the middle-income trap through innovation. “We are still waiting for that one on China,” he said.

His main thesis has always been that China uses too much debt to fund growth, without paying attention to generating returns. “Any entity that is growing rapidly but below its cost of capital is headed for an iceberg,” he said. Returns are less than economic … They’ll have to go through their credit event.”

“If [the U.S. economy] was growing its credit by 30 or 40 percent per year, we’d be growing high single digits ourselves,” he said, discrediting the view China’s historic growth has been an economic miracle: “There is not a lot of magic here if you can borrow the money.”

However, this does not mean the economy faces complete collapse tomorrow, according to Chanos.

The Chinese stock market “is like a pig on LSD, you don’t know where it’s going to run.”

“This is going to be a slow motion unwind, very similar to Japan, but on steroids. This is not smoking ruins tomorrow. This is going to take a lot of work by the Chinese leadership to work through.”

As for the stock market, Chanos recommends to stay away from the mainland A Share market altogether. He quoted a friend saying the Chinese stock market “is like a pig on LSD, you don’t know where it’s going to run.”

It has very little correlation with the underlying economy and Chanos’ firm Kynikos doesn’t take positions in this market. Part of the reason is the heavy-handed intervention by Chinese authorities.

“It has given a lot of observers pause as to how sophisticated the technocratic elite is, which was a given prior to 2015,” he said. Many people got burned trusting the government to put money into the market.

“There was an underlying view if the government encourages me to put the money into the equity market, I can’t lose money.”

Are Chinese stocks trading on overseas exchanges like Alibaba Inc. any better? Yes, but you still have to be cautious.

Despite the short-term gloom, Chanos still thinks China will be an “amazing place” long term— after it gets rid of its debt addiction.