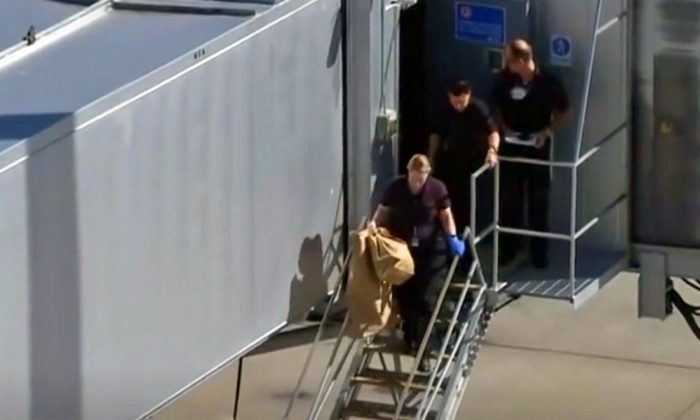 Paramedics move bags between the Air Asia plane and an ambulance at Perth Airport in Australia on April 22, 2019. (ABC/Seven Network/Reuters)
Australia

A couple is grieving the sudden death of their infant on April 22 while they were still mid-flight and on the way to start a new life abroad.

The parents from Saudi Arabia had been traveling on an Australia-bound Air Asia flight between the Malaysian capitol of Kuala Lumpur and Perth when they noticed something was terribly wrong with their baby.

They alerted the air crew that their baby, aged two months, seemed to be struggling to breathe and former nurse Nadia Parenzee, who was also a passenger on the flight, volunteered to help.

“I could see this look on the parents’ face. They just sort of handed the baby to me like this and I was like, ‘Oh my God, what’s going on,'” Parenzee told Reuters.

Crew on board the AirAsia plane called for assistance, with reports that the infant was suffering a medical episode. #9Newshttps://t.co/65ouZAk4MK

When the health professional examined the baby girl she noticed her skin tone had turned gray.

“She was struggling to breathe, so I said a little prayer. In the religion, which is the first opening prayer. As soon as I said that she went limp,” Parenzee said. “I just said to the stewardess, ‘This is a medical emergency, this is not a baby in distress.'”

She worked with doctors on board to help organize treatment for the infant.

“It was chaos, absolute chaos, because I think by this point, the parents had realized there was something dramatically wrong with the baby,” Parenzee said.

Doctors frantically tried to resuscitate the baby for more than two hours.

Four doctors on-board a plane where a baby girl died en-route to Perth took it in turns to perform CPR for 2.5 hours in a desperate bid to save her life. #9News https://t.co/jNmSIK9hsx

Nobody knew what would follow next until Parenzee performed a quick check on the baby’s eyes.

“I had known when I looked at the baby’s pupils and they did the light test that the baby had passed,” she said.

A passenger has described the harrowing moment a two-month-old baby girl died during a flight from Malaysia to Perth https://t.co/YqhaOh5oRz

Even though Parenzee had worked as a nurse before, delivering the tragic news to the parents was no easy task. The parents finally discovered their newborn had passed away and were devastated.

“We didn’t want to tell the parents that it happened because, I think what we were dealing with is, the parents would have had to hold their dead baby,” she said.

Parenzee said the Air Asia staff could not be faulted for their “fantastic” handling of the medical emergency.

Western Australian Police and paramedics assisted the air crew once the flight had safely landed at Perth Airport.

Fellow passenger Diane Jones was very upset after learning the baby had passed away.

So sad. This was our flight. https://t.co/AqVt2Ikt1f