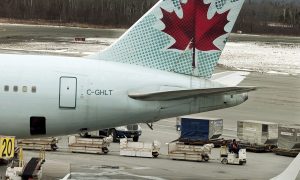 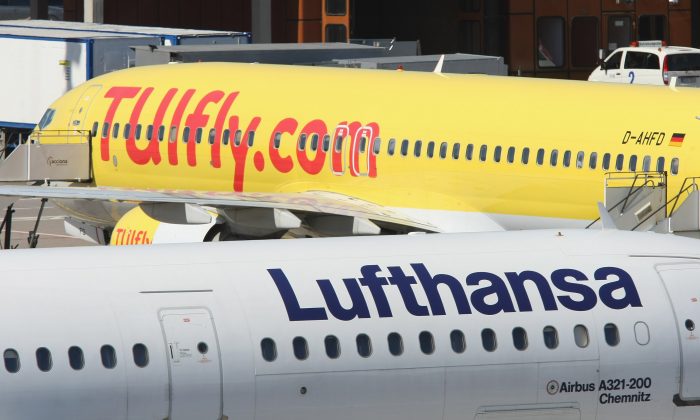 Passenger planes of German airliners Lufthansa and TUI pass one another at Tegel Airport in Berlin, Germany, on July 29, 2008. (Sean Gallup/Getty Images)
UK

A family had to sit on the floor of an airplane for a two-hour flight in the empty spaces where their seats should have been as they flew back from their summer vacation.

The airline, Tui, said that the airplane had been switched at the last minute, and the replacement aircraft had a different seating layout.

The Taylor family boarded the flight from Menorca to Birmingham after their summer vacation. They hunted down their seat numbers—41 D, E, and F—in the usual way, looking at the labels above the seats.  They found the numbers,  but when they looked down, there were no seats, according to a Jan. 14 BBC report.

“We all just looked at each other as if to say ‘Where’s our seats gone?'” Paula Taylor said.

She was travelling with her husband, Ian, and her 10-year-old daughter Brooke.

The flight had only one spare seat, which the crew gave to Brooke.

Meanwhile, Mr. and Mrs. Taylor had to sit in the flip seats normally reserved for the crew as the airplane took off.

But after take-off, they could not stay in those seats, because the crew was busy serving food and other items stored behind.

So Mr and Mrs Taylor found a place on the floor where they could sit—the space their seats should have been. Brooke did not want to sit alone, so she joined them on the floor.

"We all just looked at each other as if to say 'where's our seats gone?'"

A statement from Tui said that they would be apologising directly to the Taylors as well as offering a full refund for their £1300 tickets.

“We are sorry to hear about Mr Taylor and his family’s experience with us, ” said the statement.

“Unfortunately a last minute aircraft change meant that the seats the family was originally assigned were unavailable as the alternative aircraft had a different seating configuration.”

“We’re also sorry for the way the situation was initially handled and we’ll be investigating this.”

But Mrs Taylor said that when she initially complained about the incident, she “got short shrift” from the airline, despite having photographs of what had happened.

She claims that she was first told that there was no record of the incident of “physically missing” seats, and only offered a “goodwill gesture” of £30.

Her frustration at the brush-off pushed her to contact the BBC’s programme, Rip Off Britain, due to be broadcast on Jan. 15.

According to the Telegraph, the co-pilot came out to join them on the aircraft floor, thanking them for their “co-operation and understanding.”

"We just couldn't believe it"

“He said that how calm we were and he was so grateful because he would have had to, he would have missed the time slot take off,” Mrs Taylor said.

She described the floor as “hard, “uncomfortable” and “just filthy.”

“It’s just not an experience I ever want to repeat.”

British Airline industry regulator, the Civil Aviation Authority (CAA),  said passengers are allowed to sit in crew seats under certain conditions, according to the BBC,  but they must not be left unseated during any stage of the flight.

The CAA is now looking into the incident, reported the Telegraph, and has asked the airline to explain why the family was seated on the floor.