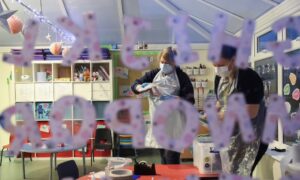 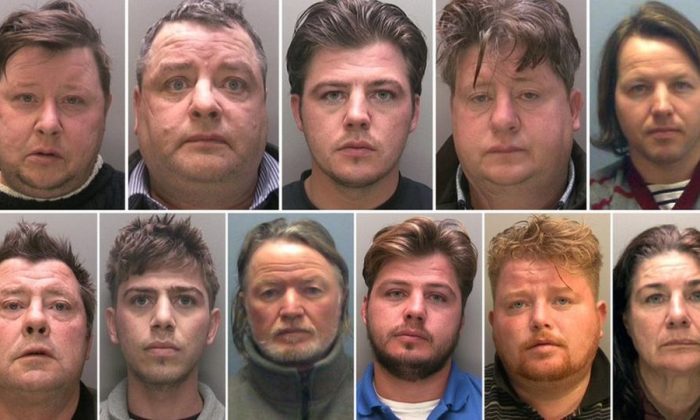 Eleven members of the same extended family have been convicted of running a modern-day slavery ring, which police described as the “largest and most complex investigation” of slavery offenses the department has ever seen.

The Rooney clan included 10 men and one 1 woman, who operated a driveway resurfacing company that employed workers to live in caravans without water or toilet facilities, BBC reported.

The workers were forced to work long hours to support the “lavish lifestyle” of the family, according to police. One had even worked for the family for 26 years.

According to the Independent, the 11 people were all gang-members and enjoyed holidays to Barbados, had cosmetic surgery, and even bought a Manchester United soccer school—all using the money earned by their slaves.

The family members were convicted of fraud and slavery charges and will be sentenced in September.

Police first began the investigation against the members of the Rooney clan back in September 2014 where they issued seven warrants in Lincolnshire, Nottinghamshire, and London, BBC reported.

Multiple victims were found through police raids, others were later traced. The UK Human Trafficking center said that 18 men had been illegally sent to the sites.

Chief Superintendent Nikki Mayo said Lincolnshire Police knew that workers at the two sites were being held in poor conditions and worked for very little money “through intelligence” gathered.

“The extent of these conditions soon became apparent—the victims were accommodated in caravans without running water or access to toilet facilities,” Mayo said.

All the victims were vulnerable adults aged between 18 and 63, many of whom were homeless and had been picked up by the family from various parts of the UK.

“They were not given training for the manual labour and although not physically trapped, they were financially, emotionally and physically abused making any escape seem impossible,” Mayo continued.

“This exploitation was illegally funding a lavish lifestyle for the defendants.

“While their ‘labourers’ were suffering, company profits helped to fund luxurious holidays to Barbados, Australia, Egypt and Mexico, the purchase of high performance BMWs, spa days and even cosmetic surgery,” Mayo said.

The superintended described how the victims were completely institutionalized and only fed when they worked and sometimes only ate the family’s leftovers.

Police investigations found around £100,000 worth of stolen goods and that the clan even targeted elderly homeowners, forcing them to sign over their properties.

While unveiling a new State Department report on June 27, Secretary of State Rex Tillerson slammed China and North Korea as among the worst offenders in human trafficking and forced labor today, and held China responsible for the tens of thousands of North Korean workers in China who essentially work as slaves there.

The congressionally mandated Trafficking in Persons Report, compiled annually by the State Department, seeks to assess government efforts around the world to combat human trafficking. The 2017 edition contains assessments for 187 countries and territories, including the United States.

The report ranks countries in three tiers, of which the Tier 3 status is the lowest and indicates a country has failed to satisfy even the minimum standards to combat human trafficking. Previously, China was placed on the Tier 2 “watch list” for three consecutive years, and has now been downgraded to Tier 3 as of this year’s report.

“An estimated 52,000 to 80,000 North Korean citizens are working overseas as forced laborers primarily in Russia and China, many of them working 20 hours a day. Their pay does not come to them directly. It goes to the government of [North] Korea, which confiscates most of that obviously,” Tillerson said.

Human rights watchdog groups in South Korea and the United States have repeatedly highlighted how the North Korean regime profits, in the hundreds of millions of dollars each year, from exporting enslaved workers to China and other countries.

The report says that China “is a source, destination, and transit country for men, women, and children subjected to forced labor and sex trafficking,” and  that “state-sponsored forced labor continues to be an area of significant concern.”

Tillerson also warned that failure to take action would lead to a chain of negative consequences for the interests of the United States around the world, as forced labor and human trafficking elsewhere would lead to rampant corruption and the undermining of the rule of law, which would then empower criminals and terrorists worldwide.

“Responsible nations simply cannot allow this to go on, and we continue to call on any nation that is hosting workers from North Korea in a forced-labor arrangement to send those people home. Responsible nations also must take further action,” he said.

The move to downgrade China was hailed by Rep. Chris Smith (R-N.J.), a long-term critic of China’s communist regime. “Secretary of State Rex Tillerson deserves the gratitude of victims and human rights defenders, [for] calling out the Chinese government’s deplorable record and complicity in the cruelty of the sex and labor trafficking problem,” Smith said.