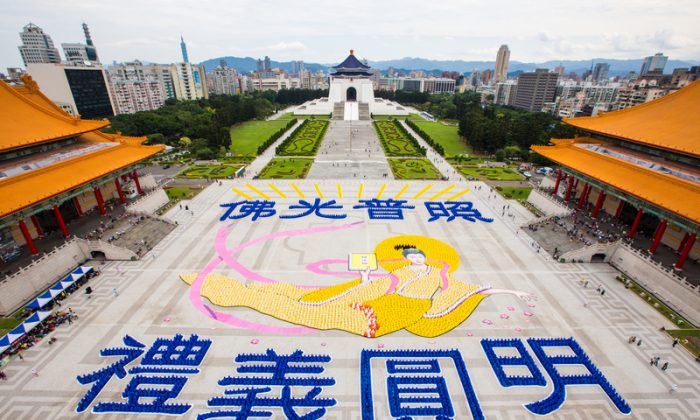 On Nov. 8, 2014, about 6000 practitioners from Taiwan, Hong Kong, South Korea, Japan, Singapore, Vietnam, America and Europe formed the Chinese characters “The light of Buddhas illuminates and heals the world” and a heavenly beauty to welcome the Falun Dafa Experience Sharing Conference, which was to be held the following day in Taipei. (Danny Li/The Epoch Times)
Asia & Pacific

On the morning of Nov. 8, 2014, about 6,000 Falun Gong (also known as Falun Dafa) practitioners from Taiwan, Hong Kong, South Korea, Japan, Singapore, Vietnam, the United States and Europe got together at the Liberty Square in front of the National Chiang Kai-shek Memorial Hall in Taipei, Taiwan to form the Chinese characters “Fo Guang Pu Zhao; Li Yi Yuan Ming” and the image of a heavenly beauty.

The characters are a traditional saying in Buddhism that is also mentioned in the foundational text of Falun Dafa, “Zhuan Falun.” It may be translated as, “the light of Buddhas illuminates and heals the world.” A heavenly beauty is a female divine being mentioned in Buddhism, which is similar to an angel in the West.

As with the formations done in the West by marching bands, the whole of this graphic image can only be seen from an elevated vantage point.

On top of the graphic are 12 golden rays above the first four characters, and the image of a heavenly beauty is in between the two rows of eight characters. The divine being is holding a copy of “Zhuan Falun” in her right hand, while her left hand scatters flowers to the human world.

Producing this flawless formation required painstaking preparations. One of organizers said that it took them three days to get the ground layout done.

She felt all of the work is worthwhile as the entire graphic looks so magnificent, inspiring feelings of compassion and peacefulness.

Falun Dafa practitioners in Taiwan have held character and image formation activities since 2000, she said.

The organizer hopes that similar activities demonstrating the magnificence of Falun Dafa will be held on Tiananmen Square in China one day. Since July 1999, the Chinese Communist Party has sought to eradicate Falun Gong in China, but according to the Falun Gong website Minghui.org tens of millions of Chinese still practice the discipline.

Taiwanese practitioner Wu Qingxiang has designed the character formations for the past 16 years. He explained these eight Chinese characters symbolize that Falun Dafa has spread all over the world, reaching 114 countries or regions on five continents and has been welcomed by all ethnicities and nations.

Wu said as Falun Gong practitioners seek to improve themselves according to the universal principles of truthfulness, compassion, and tolerance—the practice’s fundamental principles, all abnormalities in their daily lives can be corrected naturally.

The character formation in Taipei was done partly with a mainland Chinese audience in mind.

“There are a tremendous number of Falun Gong practitioners in Taiwan, and through character and image formation activities, we demonstrate to the world that Falun Dafa is popular in every corner of the world,” Wu said.

“If practitioners in China could see the photos of this activity, it would bring them great inspiration,” Wu said. “We hope that they are able to practice (Falun Gong) openly and legally.”

Mr. Pan, a tourist from China, took photos of the formation.

“I am amazed,” said Pan. He said that more and more people in China are coming to know about how the Chinese regime has persecuted Falun Dafa and lied to the Chinese people about the practice.

Each day bus after bus of Chinese tourists visits Chiang Kai-Shek Memorial Hall. One of the tourists asked Taiwanese practitioner Ms. Huang Chun-mei how Falun Dafa could hold such an open activity, and wondered whether it was approved by the government.

Ms. Huang confirmed that the government had approved, and told the tourist how the Chinese regime has lied to its people about Falun Gong.

In addition to making the formation together, the gathered Falun Dafa practitioners practiced the discipline’s exercises together on Liberty Square. They also displayed poster boards around the Square that told tourists about what the practice of Falun Dafa is and how it is persecuted in China. On Nov. 9 in Taipei, the practitioners gathered to share with one another their experiences with Falun Dafa.

Translated by Billy Shiyu and Hsin-Yi Lin. Written in English by Stephen Gregory.