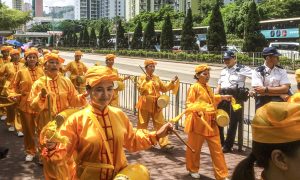 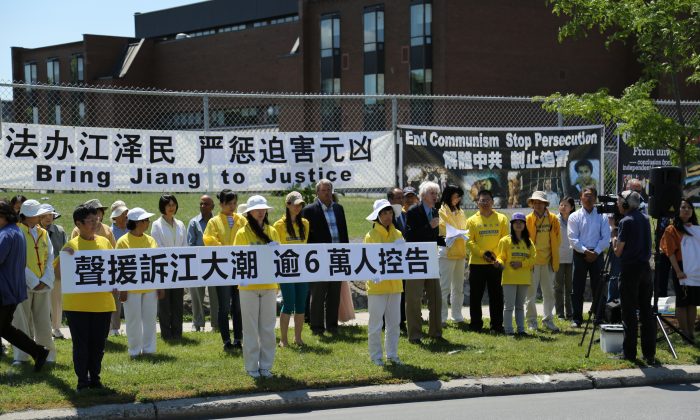 Former MP Hon. David Kilgour speaks while Ontario MPP Jack MacLaren stands behind him, surrounded by Falun Gong practitioners at a rally on July 15, 2015, in front of the Chinese embassy in Ottawa marking 16 years since the launch of the persecution against the traditional spiritual practice in China. (Jonathan Ren/Epoch Times)
Canadian Content

OTTAWA, Canada—Ottawa Falun Gong practitioners marked the 16th anniversary of their practice’s persecution by the Chinese regime amid a growing wave of criminal complaints against the man who initiated the brutal campaign on July 20, 1999.

Gathering at noon in front of the Chinese embassy in Ottawa on July 15, they were joined by Ontario MPP Jack MacLaren and former MP and Secretary of State for Asia-Pacific David Kilgour.

“Sixty thousand people have filed official complaints saying there has been criminal activity by Jiang Zemin in China against the Falun Gong,” MacLaren said.

“[Practitioners] have been imprisoned and tortured and suffered death, even organ harvesting, a heinous crime. It is the most outrageous of human rights abuses that we can find anywhere in the world,” he noted.

“Beijing’s party-state has committed systematic murder against practitioners of this peaceful exercise and meditation movement,” Kilgour said. “The covert, large-scale seizure of practitioners’ organs for commercial transplantation purposes is a major feature of this persecution.”

Falun Gong is a traditional Chinese meditation practice that includes a set of gentle exercises and a strong moral focus based on the three pillars of truthfulness, compassion, and tolerance.

The violent persecution of adherents in China has continued for 16 years, yet the number of practitioners who have been tortured and left maimed or killed in the process has been unverifiable, as such statistics are kept secret by the regime.

Truthfulness, compassion, and tolerance—I would suggest the Chinese government should learn to practice those three very vital principles and they too would be good government like we have here in Canada.
— Jack MacLaren, Ontario MPP

What has been verified is that a significant number of adherents have died as a result of their vital organs being removed for transplant, a practice that has amassed huge profits for all involved including the army, physicians, and hospitals.

The lawsuits charge Jiang with genocide, crimes against humanity, torture, unlawful imprisonment, and more than a dozen other crimes.

Xun Li, representing the Falun Dafa Association of Canada, noted that Canadians are among those who have launched suits against Jiang.

“Dozens of Falun Gong practitioners from Canada have joined this wave of legal action against Jiang, including Paul Li of Toronto, whose father Xiaobo Li earlier this year was sentenced a second time to 8 years in prison for practicing Falun Gong,” he said.

“At this critical time in history, we call on the Chinese regime to stop the persecution of Falun Gong and release all Falun Gong prisoners of conscience, including eight relatives of Canadians. We also call on all Chinese people of conscience to leave a proud legacy and be a part of this wave of upright action.”

Kilgour, along with Winnipeg-based international human rights lawyer David Matas, began an independent investigation into the allegations of organ harvesting in 2006. They co-authored “Bloody Harvest: The killing of Falun Gong for their organs,” in which they verified that the allegations were indeed true.

On Feb 3 this year, the House of Commons all-party subcommittee on International Human Rights released a statement condemning the pillaging of organs from Falun Gong, Kilgour noted.

As the instigator of the persecution, Jiang should be the first in Beijing indicted before the International Criminal Court.
— David Kilgour, former MP and Secretary of State for Asia-Pacific

It expressed “deep concern over credible allegations that prisoners of conscience and members of religious and ethnic minority groups, including but not limited to practitioners of Falun Dafa and Uyghurs, in the People’s Republic of China are being executed for the purposes of harvesting and transplanting their organs.” It also called for an end to the transplantation of organs from living or deceased donors without consent.

“We hope that within the next year all of these terrible atrocities end and justice prevails for the perpetrators of these terrible crimes. … Truthfulness, compassion, and tolerance—I would suggest the Chinese government should learn to practice those three very vital principles and they too would be good government.”

Kilgour added that Falun Gong practitioners from 19 countries besides China have also filed complaints against Jiang. “As the instigator of the persecution, Jiang should be the first in Beijing indicted before the International Criminal Court,” he said.

Li of the Falun Dafa Association noted that the filing of criminal complaints against a living communist dictator in China is unprecedented.

“This tremendous wave of legal action reflects both the will of Heaven and the collective will of the people,” he said.

“This is a critical step toward prosecuting Jiang Zemin. In the process, as more people awaken to what is right and wrong, the legal action will help to restore conscience, morality, and the rule of law, bringing a bright future to China and the world.”