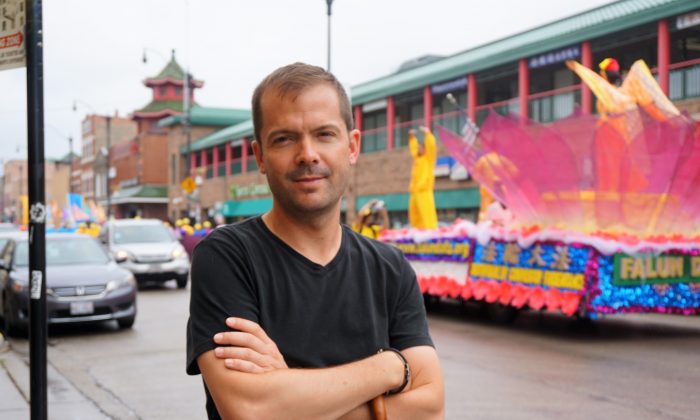 CHICAGO—What started as a rainy, gloomy morning on July 21 turned into a mild and sunny afternoon.  Practitioners of Falun Dafa (also known as Falun Gong) from all over the Midwest gathered in Chicago’s Chinatown.  At about noon on this Saturday, their parade began and almost immediately the rain stopped.

Falun Dafa is a peaceful meditation practice rooted in the guiding principles of Truthfulness, Compassion, and Forbearance.  It has been persecuted by the Chinese communist regime for over 19 years now.   The practitioners hold a parade several times a year to promote awareness of the practice and showcase its peacefulness and beauty, as well as to call for an end to the brutal persecution.

Carrying colorful banners, some of which read “Falun Dafa Is Good” and “Stop the Persecution of Falun Gong in China,” the practitioners marched from Sun-Yat-Sen Park to Chinatown Square and back.  Drummers in colorful uniforms supplied the rhythm to the song that was being played, “Falun Dafa Hao,” which translates “Falun Dafa Is Good.”

On a float, elaborately decorated with lotus flowers, several practitioners demonstrated the exercise movements of the Falun Dafa practice. In addition to the core beliefs of Truthfulness, Compassion, and Forbearance, the followers practice five slow moving or even completely still exercises.

Marc Belanger, a political science professor from St. Mary’s College in South Bend, Indiana, came to Chinatown with his wife and some students to have lunch and stopped to watch the parade.  “This is a protest against the oppression of Falun Gong in China. … I didn’t realize it is a big issue among Chinese people in the U.S., so seeing the protesting is interesting to me,” he said.

“It is pretty cool [to see], because a lot of people were coming for a great cause. It is great to see. You don’t see it very often anymore—a bigger community coming together,” said college student Ethan Gogel, who was also passing by.  “I see there is a lot of change coming. They are going to lead it. What they are doing is great,” he added.

Not only did the parade participants represent people of many different cultures, but the onlookers did as well.  Christopher Stoltez, a Christian priest from London, was surprised to bear witness to this event.  Although he had seen Falun Dafa practitioners’ activities in various places throughout London, he had never seen a parade.  “It is very pleasant, very comforting, very reassuring. It seems to speak of something… It is lovely,” he said.