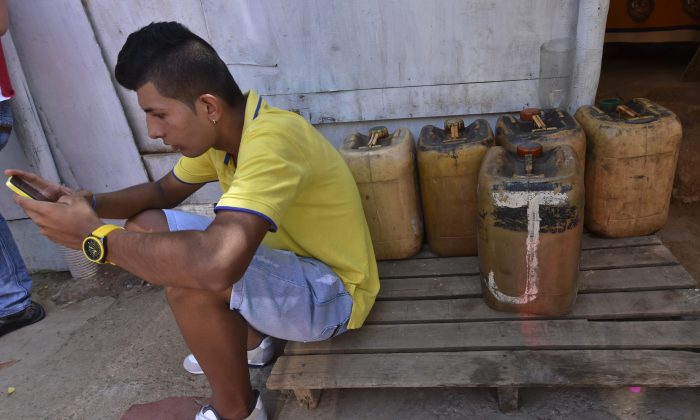 BOGOTA, Colombia—Police units were hastily dispatched on Oct. 26 to stop a mob of more than 150 people who had violently taken to the streets of Ciudad Bolívar, a mega-slum sprawling into the hills of southwestern Bogotá, Colombia’s capital.

The crowds, enraged by news disseminated via WhatsApp that Venezuelans were kidnapping young girls, began attacking the alleged suspects. Video footage shows one of the three victims laid out helplessly on the floor, blood streaming from his body as he is hit by seemingly endless rocks, kicks, and punches. Among the mob are young children, women, and the elderly, who scream “thief” and “kill him” over the wail of police sirens. Many of the vigilantes hold sticks; some wield machetes.

The violence left three of the seven people injured—the other four were police officers—in intensive care. But 23-year-old Maikel Eduardo Mabello, who had recently fled political and economic turmoil in Venezuela, was not so fortunate, according to news source El Tiempo. Unable to flee the attack because of a chronic leg injury, he received a fatal stab wound to the chest.

The police have since confirmed that Mabello was not actually Venezuelan, but a Colombian who had resided in the neighboring country for several years. Neither had he been involved in the kidnapping of children: The images of him circulating were one of six rumors, or “fake news stories,” refuted by the police in recent weeks.

That same weekend in Medellín, Colombia’s second-largest city, another young man was left in intensive care—again due to rumors circulating via the messaging app of child-kidnapping. It is unknown who created the false accusations.

“Clearly there are people who are interested in generating panic and anxiety in citizens,” the Secretary of Security for Bogotá, Jairo García, told local press. Eight individuals were investigated over the death of Mabello, but no one was charged.

Similar incidents have now been reported in all four major Colombian cities. Local police asked citizens not to share fake news, to verify sources, and avoid taking justice into their own hands. They were unable to comment to The Epoch Times on the incidents or reveal how many cases have been recorded.

Lynchings caused by fake news or rumors dispersed via WhatsApp have been most prevalent in India, where at least 18 people have been lynched since April.

A wave of similar cases across Latin America in recent months, however, suggests the trend is spreading.

On Oct. 16, a nearly 1,000-strong mob enraged by WhatsApp rumors of child-kidnapping beat three individuals to death in Posorja, a village in southwestern Ecuador.

In perhaps the most shocking case to date, a mother in the small town of Acatlán in Puebla, Mexico, witnessed—via a live Facebook stream—her 21-year-old son and his 43-year-old uncle being burned alive by a mob charged by false rumors.

A string of other lynchings have been reported across the continent from Brazil to Ecuador.

Following political pressure in India, WhatsApp has limited the number of times a person can forward a message and has made it more difficult to forward video or image content on the platform. No such initiative has been taken in Latin America yet.

While not as common in North America or Europe, WhatsApp is the second-most popular medium for consuming news after Facebook in every Latin American country analyzed by Reuters’ 2018 Digital News Report (Argentina, Brazil, and Chile), except in Mexico, where it is third.

The app continues to gain popularity as a means for news consumption due to declining trust in news shared via Facebook, but according to experts, WhatsApp is equally flawed—and potentially dangerous.

“WhatsApp, like Facebook, is an echo chamber,” said Jose Luis Peñarredonda, a Colombian journalist and researcher of fake WhatsApp news.

Facebook’s algorithm displays content users are more likely to agree with, and has been criticized globally for contributing to political polarization and disinformation.

WhatsApp has a similar user-created effect as “families and friends are unlikely to share unpopular opinions or content which could cause debate,” Peñarredonda said. The result is that inaccurate, potentially incendiary information spreads quickly and unchallenged.

Also contributing to the rise of fake news in Latin America is a growing skepticism of big media, says Daniel Rivera, a consultant combating fake news.

“People create their own reality,” he said, pointing to the media’s failings, which have pushed many toward news shared via messaging apps or social media.

To combat the trend, police forces across Latin America are campaigning via social media to increase awareness of fake WhatsApp “chains” and inform the public on how to identify disingenuous information.

But as for prosecuting those responsible for disseminating false allegations, there is little the authorities can do. WhatsApp’s end-to-end encryption is strong, and penetrating it would be unlawful in most democratic states.

“Laws to prevent the sharing of fake news would not only be bad for democracy, they would be stupid as they are impossible to enforce,” Peñarredonda said.