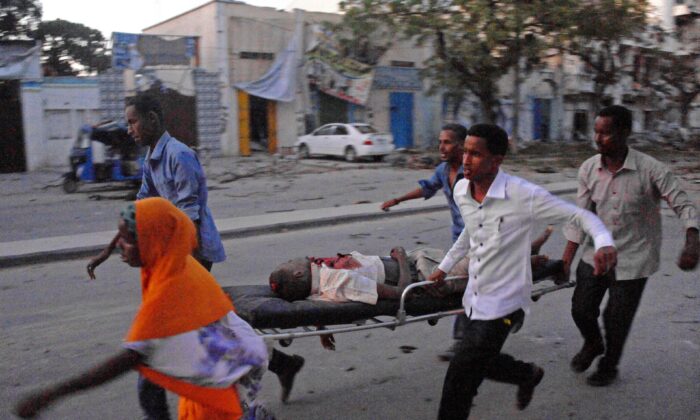 People carry a victim of a terror attack at the Ambassador Hotel, after Somalia's Al-Qaeda-linked Shabaab launched a deadly attack in Mogadishu, Somalia, on June 1, 2016. (Mohamed Abdiwahab /AFP via Getty Images)
Africa

Conditions in Africa represent a “perfect storm” that’s fueling the rise of Islamic terrorism on the continent, security experts tell The Epoch Times. They cite Africa’s newest insurgency, in northern Mozambique, as a prime example.

Professor Adriano Nuvunga, from the political science department of the Eduardo Mondlane University in Mozambique’s capital Maputo, warned of growing militancy in Cabo Delgado Province as far back as 2007. He says the motivations of those who answer the call of jihad are both economic and ideological.

The academic, who’s also a human rights and democracy activist, watched as marginalized youth in the impoverished region began rebelling against the authority of local Muslim leaders. In 2010, huge natural gas deposits were found off the Cabo Delgado coast, and the Mozambican government, in concert with French energy giant Total, soon began exploiting them.

Nuvunga warned how “dangerous” it was to exclude local inhabitants from access to the bounty. He warned of Islamic terrorists crossing the borders of Tanzania and Somalia to take advantage of the disaffection and economic exclusion of locals, to instigate a “jihad.”

Nuvunga visited Cabo Delgado regularly and heard that frustrated fishermen, informal traders, and illegal miners were joining a band of “al-Shabaab” fighters in the bush to begin an insurgency against the state.

Not many people listened to him until, in October 2017, the insurgents attacked the coastal town of Mocímboa da Praia, shooting and beheading people. Since then, al-Shabaab has burned villages, taken women and girls as servants and sex slaves, and demanded that Cabo Delgado be governed by Sharia law.

Nuvunga says government soldiers, along with private military contractors hired by the government, have abused the people they’re meant to protect in Cabo Delgado.

His organization, Center for Democracy and Development, puts the current death toll as a result of the violence at around 3,000, with 600,000 to 800,000 people displaced from their homes.

Along with the emergence of ISIS in Mozambique, there are now terrorist insurgencies in all major regions in Africa.

Juliet Kamau, an independent security analyst based in Nairobi, says the continent represents a “perfect storm” to fuel fundamentalist terrorism: millions of desperately poor people with nothing to lose by joining insurgencies, combined with large ungoverned territories. In such spaces, terrorists establish strong bases.

According to the African Union (AU) Center for the Study and Research on Terrorism, there were almost 1,200 terrorist attacks across the continent in the first eight months of 2020—an increase of almost 20 percent in such incidents compared with the same period in 2019.

She says half of the 20 countries globally that experience “serious terrorism” regularly are now in Africa.

Graham says the AU is trying to combat terrorism but seems “overwhelmed” by the scale of the threat.

“If we have an African Union in place, if we have the African standby force, the peace and security council architecture—at least on paper—why is it that we’re not able to be proactive and use early warning systems to really address problems before they become major emergency threats, and lives are lost?”

The AU didn’t immediately respond to requests for comment.

At the moment, Graham says, the AU reacts to terrorism using “multiple, ad hoc force deployments,” such as the one currently underway in Mozambique, consisting of troops from several southern African nations, plus Rwanda.

“They, although useful, tend to detract slightly from a single African focus by states to fine-tune a structured response to terrorism that’s a holistic response, a continental response, as opposed to regional responses,” she said.

Taliban hegemony in Afghanistan will be a “massive propaganda tool” for Islamic terrorist organizations everywhere, according to Stephen Buchanan-Clarke, who heads security programs for Good Governance Africa in Johannesburg.

“The Taliban victory will be a huge source of motivation for jihadist groups, who will portray it as proof that a small, local insurgency can, over time, defeat even the greatest military in the world,” said the security analyst, who maintains contact with a network of intelligence and security force sources across the continent.

Officials in the defense departments of several African countries spoke to The Epoch Times about their concerns that Taliban control of Afghanistan could encourage African terror groups to launch extensive, and fruitful, recruitment drives.

“The propaganda aspect of the Taliban takeover certainly is the single biggest threat to African security,” Buchanan-Clarke said.

He also warns of terrorist organizations in Africa using a possible increase in the flow of heroin from Afghanistan to finance their operations, even though the Taliban has previously declared itself opposed to the trade.

“They have said publicly they’ll ban the trade, but this is highly unlikely given the economic situation in Afghanistan and the realities that are about to hit the Taliban with regard to governing a nation,” Buchanan-Clarke said.

The United Nations Office on Drugs and Crime says the entire eastern seaboard of Africa is a major heroin smuggling route.

Heroin farmed in Afghanistan is shipped from the Makran coast of southern Pakistan to coastal towns in Mozambique, in particular, where policing is poor and corruption rife. From there, the drug is trafficked into South Africa, which in itself is a big market, and onward to international markets.

“There’s potential, in time, for the Mozambican insurgents to gain a foothold in the heroin trade to sustain their operations,” Buchanan-Clarke said.

The analyst doesn’t think the Taliban will be training African Islamic insurgent groups now that it’s assumed control of Afghanistan.

“The Taliban’s predominantly Pashtun, and they’ve a much more local focus; theirs is more of a nationalist insurgency. They’re pretty much limited to Afghanistan and parts of Pakistan. It’s not a global jihadist network in the same sense that ISIS and al-Qaeda are.”

Far more likely, said Buchanan-Clarke, is an increase in ISIS operatives being sent to Africa to train terror groups such as Boko Haram in Nigeria.

“Both Boko Haram and Islamic State West Africa have received training from ISIS Central in Libya and Iraq. It’s ISIS trainers being sent to Africa, not African insurgents going to train abroad.”

He says the weaponry and military assets left behind by U.S. forces in Afghanistan are “obviously extremely concerning.”

“Whether the Taliban choose to trade some of those arms to other insurgents in the region, it’s too early to tell, but there is potential. But then again, the Taliban has its own fights with ISIS and al-Qaeda.”

Buchanan-Clarke said it’s important to realize that while the United States has withdrawn from Afghanistan, it hasn’t abandoned its global war on terror, and Washington’s well aware that Africa is “a significant new front” in that conflict.

“It’ll be interesting to see if the U.S., because it now has a lot of freed-up counterterrorism capacity, chooses to reallocate some of that toward Africa. We may see an increased American presence on the continent,” he said.