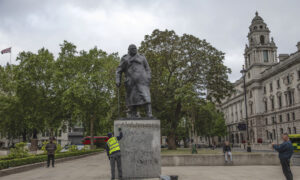 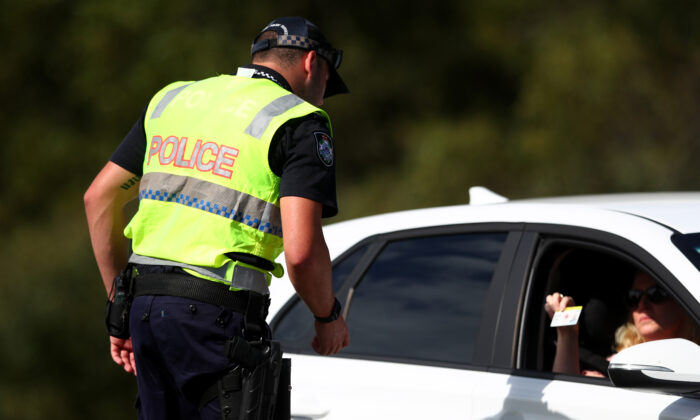 Queensland Police stop vehicles at a checkpoint set up at the Queensland and NSW border in Coolangatta on March 26 on the Gold Coast, Australia. (Chris Hyde/Getty Images)
Australia

An Adelaide man who impersonated a police officer handcuffed one of his victims and forced another to pay a bogus $300 fine, a court has heard.

Samuel Mark Narroway appeared in the District Court for sentencing submissions on Sept. 9 after pleading guilty to three counts of unlawfully wearing a police uniform, deception and aggravated false imprisonment.

The court was told that Narroway had also worn a police-style belt and had a car set up with flashing lights, which were used to pull over people during his offending in September last year.

In one instance a man had been handcuffed and placed in the back of the vehicle before being driven home.

It was an experience the victim said had left him anxious when driving at night and scared when approached by police.

Defence counsel Oliver Cole said Narroway did not shy away from the fact that he had a significant history of deception offences and that a degree of pre-planning was involved.

He said the items used to impersonate officers were easy to obtain over the internet in a relatively short space of time.

However, it was conceded the flashing lights would have appeared legitimate to unsuspecting motorists.

Judge Joanne Tracey said in such circumstances any rational person would pull over.

“That is what’s so horrifying about all this,” she said.

Cole said Narroway made admissions when spoken to by police and said his offending was sparked by a “fanciful idea” that had then “steamrolled”.

He said it was also unusual in that he made no threats of violence nor intended to cause any harm.

The court was told that substance abuse was a “theme” that featured across the 29-year-old’s offending history.

Amid periods of homelessness and methamphetamine addiction, he was “committing offences to survive”, Cole said.

Prosecutor Sophie Taylor asked for an immediate custodial sentence but conceded suspension or home detention was an option.

Cole urged the judge to fashion a sentence that might allow his client to be released soon, considering he had already spent about a year in custody.

Judge Tracey called for a report into what programs might be available to Narroway while in custody to address his issues and ordered his case return to court in October.